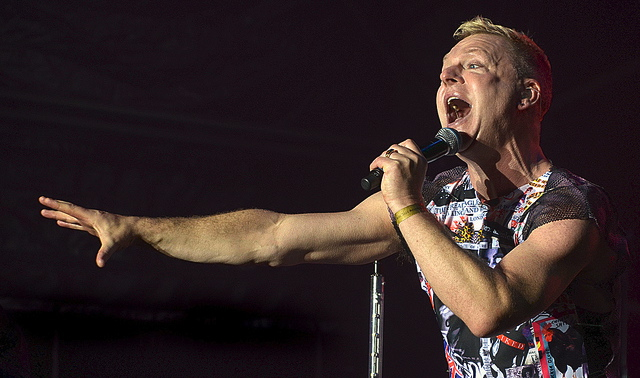 Get ready for Atlanta Pride to go full-on gay dance anthem on your ass. With hits like “A Little Respect,” “Chains of Love” and “Oh L’amour,” Andy Bell of Erasure headlines Pride Saturday co-sponsored by Project Q and David magazine in association with Brushstrokes and Jungle. As the voice of the award-winning Brit pop duo Erasure, Bell has been making us dance and given us a reason to be proud for more than 25 years. From the beginning -- and way before most gay recording artists were comfortable coming out -- he’s been openly gay, a vocal HIV/AIDS advocate, and most importantly, a remarkable vocal talent who’s fabulous in concert. He brings all of that and more to the Pride stage on Oct. 13. With Erasure and as a solo act, Bell has sold more than 20 million albums. From 1986 to 1997, he achieved 24 consecutive Top 20 hits. The duo hit the charts again in 2009 with “Always” and set gay Atlanta on fire last year with a concert at Center Stage and a collaboration with local lesbian DJ sensation Vicki Powell behind their album "Tomorrow's World" and the single “When I Start To (Break It All Down).” "Andy Bell holds a unique place in the music world and in gay culture, not only for his talent but for being an out and proud entertainer," says Mike Fleming, co-owner of Project Q Atlanta. "His high-energy songbook stretches across gay generations. When he headlines Pride, he'll bring back memories for longtime Erasure fans, but he'll also gain new fans with those classic gay anthems for the next generation. We're pumped to co-sponsor his appearance.” Bell tells Project Q Atlanta that playing Pride festivals is a special experience for him over and above performances at other venues. It’s a chance to connect with an LGBT fan base that has remained rabidly loyal throughout his career, he says. “Pride is always special because it is a grass roots organization and very community based,” Bell says. “You always feel a real affinity with the people.” And he’s just as excited for his Atlanta return. “Atlanta is a tough, hard working city, and the people are quite down to earth,” he says. “We always seem to be welcomed with open arms." With Tuesday’s announcement of his Piedmont Park performance, Pride finally allows us let the cat out of the bag. Together with the guys at David magazine, we made Atlanta Pride an offer it couldn’t refuse: Get the voice of Erasure to the Pride stage with no out-of-pocket expense for Pride. Months of effort, as well as invaluable support from gay-owned businesses Jungle and Brushstrokes, finally paid off. “We are so excited we were able to partner with Project Q to bring this amazing entertainer as one of the headliners at Atlanta Pride," says Chip O'Kelley, Chief Operations Officer for David. "His dynamic performance, amazing voice and enormous popularity will be a great addition to Pride's entertainment lineup and put that Erasure magic into Pride on Saturday.” And the folks at Pride appreciate it. “We were thrilled when the guys from David and Project Q approached us about sponsoring Andy Bell to perform at the Festival this year,” Glen Paul Freedman, Atlanta Pride board chair, says in a prepared statement. “It is because of relationships like this and commitments to the event that help us keep the festival free to anyone who would like to attend.” Bell is just the first headliner to be announced for this year’s Oct. 13-14 festival. Pride expects the full entertainment lineup to be released by Sept. 1. Until then, let the Andy Bell news help you start psyching up for Pride 2012 in the video below with one of the songs that solidified his work in our hearts.