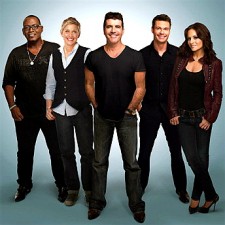 I began recapping “American Idol” in 2007 and was featured on “Entertainment Weekly’s” now defunct TVFan site. Now, I bring the snark to Project Q Atlanta on a weekly basis.

Season 9 debuts on Fox Tuesday and Wednesday with two nights of audition shows.

“American Idol” is my guilty pleasure, and since I’m a music junky—my tastes run from Lady Gaga to Emmylou Harris and Fleetwood Mac to The Fugees—I think I’m just as qualified as new judge Ellen DeGeneres to decide who can carry a tune and who should have their mouth sewn shut.

If her judging is anything like her appearance on “So You Think You Can Dance” last summer, it will be a series of occasionally funny one-liners and jokes that fall flatter than J.Lo throwing on her Louboutins.

Don’t get me wrong. I love Ellen, but she’s replacing the diva that is Paula “Miss Pills” Abdul. Sure, Paula had no business judging a singing competition, but her incoherent babble was often more entertaining than the contestants.

The addition of Kara Diolaguardia–or whatever her name is–as a judge last year was pointless, often made the show run long, and for an industry “heavyweight” she displayed a frightening lack of musical knowledge week after week. Beyond useless.

Unfortunately, Kara is back this year along with Randy Jackson, who will spend the season calling contestants “dawg” and reminding everyone he used to be in Journey and produced Mariah. Yeah, Randy, we know.

Atlanta’s own Miss Ryan Seacrest is back as host, and even if he came flying out of the closet on a sparkly broomstick with Kathy Griffin riding shotgun, I’d still find him the most boring piece of white bread on television.

That leaves Simon Cowell. Love him or hate him, he’s the only judge whose opinion counts and offers anything approaching real critique, even when he’s being a bastard and making Midwestern virgins cry after they slaughter a Heart song.

Rumor has it that this will be Simon’s final season as he plans to bring the UK hit “X Factor”–the show that discovered Leona Lewis–to the states. If Simon leaves, Fox should pull the plug. Keep in mind that the UK version of “Idol,” which started the global phenomenon, only ran four seasons, so maybe it’s time for something new.

The law of diminishing returns has been plaguing Idol since Carrie Underwood won in 2005. She’s the last “superstar” winner of the show, although finalists like Chris Daughtry have done well post-Idol.

Fantasia and Ruben Studdard never found a big audience, Taylor Hicks is back to releasing his own albums, and last year’s winner, Kris Allen, has all but been left in the glitter dust of runner up Adam Lambert. And while Lambert got all the press—especially after his “risqué” performance on the American Music Awards—his album is a disappointment and has almost fallen off the Billboard Top 40 chart.

So why bother to recap Season 9? Because it’s bitchy fun. I guarantee that at some point over the next four months, I’m going to say something about your favorite contestant that is going to make you froth at the mouth. That’s what the comment section is for, and I hope you will join the discussion every week.