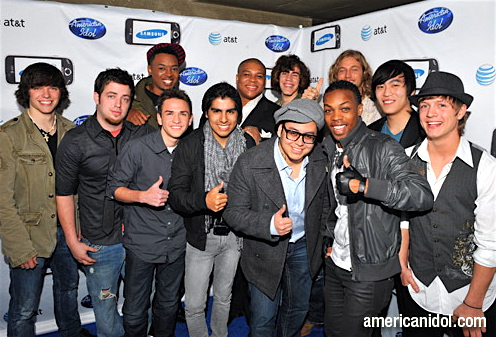 After the disastrous performances from the Top 12 girls on “American Idol” Tuesday night, I was hoping the Top 12 boys would really shine, but they didn’t come close.

As with the girls, it was a night of terrible song choices and even worse voices. Some of these guys simply cannot sing. You know it’s a bad night when the commercials are more entertaining (“Glee” back in April and Powerade’s resurrection of NuShooz’s “I Can’t Wait.”). Read on.

Todrick Hall: Was he actually singing? He sort of rapped/talked Kelly Clarkson’s “Since You Been Gone” and stripped it of any melody, making it unrecognizable. Arrogant, cocky and more jazz hands than a Fosse musical, Todrick needs to go home immediately. If you voted for this ego monster, shame on you.

Aaron Kelly: He’s only 16, cute as a button and already making the tweens scream in the audience. He has a surprisingly good country/pop voice, although I wasn’t feeling his version of Rascal Flats’ “Here Comes Goodbye.” He’s a safe bet for all the flyover state conservatives, so he’ll make Top 12 for sure.

Jermaine Sellers: He auditioned in Atlanta and is a self-described “church singer,” but God wasn’t with him tonight as he destroyed “Get Here” by Oleta Adams. Breathy, pitchy and more runs than a hooker’s pantyhose, it was like a bad high school talent show performance.

Tim Urban: He wasn’t supposed to be on the show (replacing Chris “Sad Orphan” Golightly, who lied about his recording contract), and after that shitty version of OneRepublic’s “Apologize,” the reason is crystal clear: The boy can’t sing. Sure, he’s cute and “adorable,” as Ellen kept reminding us, but that was just fucking painful. Thanks for being the sacrificial lamb.

Joe Munoz:?Joe brought a little Latin flavor to Jason Mraz’s “You and I Both,” but as Simon said, it was a safe, boring song. Not the worst of the night, but not the best. That transition to the chorus was rough, dawg.

Tyler Grady: He’s a walking cliché straight from a Doors tribute band. His version of “American Woman” wasn’t horrible, but it was more of an acting job than an original performance. Val Kilmer did it better in “The Doors” movie. Just sayin’…

Lee DeWyze: He’s a paint store clerk, and his uninspired cover of Snow Patrol’s “Chasing Cars” was a bit like watching paint dry. It was one note, shouty and a terrible song choice. For whatever reason, Simon declared this the best performance of the night. Paula must have snuck in and spiked his cup.

John Park: Like Shania Twain, I love John’s lips, bottom end and head, but his decision to cover “God Bless the Child” was so disappointing. The moment he started, I knew the judges were going to crawl up his ass for sounding “old” and not being current. It was flat and uninspired, despite the fact John said the song had meaning for him. Sigh.

Michael Lynche: The producers have pimped the story about his baby being born during Hollywood week nearly to death, but his cover of Maroon 5’s “This Love” wasn’t terrible. It wasn’t great either. His personality will carry him forward, but he kinda gave me the yawns.

Casey James: He made Kara’s panties slide to the floor when he took off his shirt during his audition, and he brought the sexy tonight covering Bryan Adams’ “Heaven.” Casey is – to borrow from Prince – one Sexy MF, and he can sing. This was my favorite performance of the night just because he sounded natural and it was an effortless performance. And he’s hot.

Alex Lambert: He’s cute (even with the mullet), and his voice is a ringer for James Morrison, so covering “Wonderful World” was both a blessing and a curse. He looked like a deer caught in the headlights and sorta botched the ending, but I think he did well enough to stick around.

Andrew Garcia: He memorably did an acoustic cover of Paula’s “Straight Up” during Hollywood week and was obviously trying to recapture that magic with Fallout Boy’s “Sugar, We’re Going Down.” Unfortunately, that song isn’t meant to be performed acoustically. It was just, as Simon said, indulgent. A style note: Is he shopping for his eyeglasses at the ‘80s store?