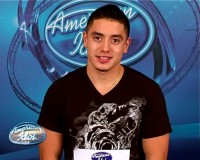 The circus comes to town one last time this season as the “American Idol” auditions clown car rolls up in San Francisco. It’s the final chance for 2011 hopefuls to snag a golden ticket to Hollywood Week.

Adam Lambert was discovered at the San Fran auditions, so there are high hopes for finding big talent. Freaky Ukranian import Inessa Lee isn’t one of them. Maybe less time with the eyebrow tweasers and self-delusion and more time with a vocal coach would help.

Brittany Mazur is pitchy as hell, Lara Johnston’s voice is quirky but flat, and Matthew Nuss is good for karaoke but not much else. Oddly, the judges see these as signs that things are looking up. All advance to the next round against our better judgment. But Stefano Langone (top photo) is the hotness. Sexy & Scarred was in a car crash a few years ago that nearly killed him. He feels he was saved for a higher purpose, but his voice is all over the place. The crack trio—or cracked out trio—of judges love it. He’s through to the next round.

Karaoke host Clint Jun “June Bug” Gamboa has big bottle-bottom glasses that make him look like Charlie Chan. Luckily for him, his voice has a smooth groove, and the tone on his “I Want to Be a Billionaire” was one of the best a cappella performances we’ve seen this season. Lose the glasses, brother. Following Clint, it’s time for the show’s trademark circus freaks to make sure open auditions don’t get a hint of reputation for quality. Enter Kenneth Berba. He wears earmuffs with his Flashdance shirt, bounces off the walls and howls out an immediate “No” from the judges. Bye! Weston Lee Smith isn’t even interesting to look at, much less to hear. See ya! A self-made Transformer costume is the best thing about Drew Beaumier. Later!

After those guys entertain viewers who tune in for the bad and the ugly, a few girls show up with the good. We’ll be seeing more of three golden voices from the Golden State whose names the show doesn’t share. They do grace us with the name and beauty of Julie Zorrilla (middle photo), a Columbian national whose family escaped guerilla warfare in the ‘90s. Now she’s belting out “Summertime” like a homegrown American. Like her journey from Columbia to California and from her “Idol” audition to Hollywood Week, Julie’s really goin’ places.

But why keep up the momentum? This calls for a few off-key auditions for the gawkers out in TV Land. Lynard Skynard guy? No. Tone deaf hat boy? Nu-uh. Jesus beard with no sense of melody? Sorry, dude. Policewoman stripper from the bachelor party down the street? No, baby, no.

Emily Ann Reed’s house burned down a week before the audition. All that’s left is a guitar and a dream, and by our estimation, it could be all she needs. Emily’s baby-talk speaking voice belies singing that’s part Lucinda Williams, part Lena Horne. She’s not for everybody, but we like it. Go get ‘em in Hollywood, Emily Ann. 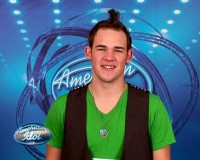 After a montage of requisite tears and jeers from rejects, the final contestant is 21-year-old James Durbin (bottom photo). He’s faced a lot of adversity, from the death of his father to being diagnosed with Turret’s Syndrome, from being bullied by other kids to a life of debilitating unemployment.

Enough backstory. James is really cute, and he wants this really bad. His powerful voice shows incredible range and great potential. Glambert would be as proud as James’ family is. We’re glad, too. The audition season ends on a happy note.

Even better news? The open auditions are over for another year, kids. See you Thursday for the first edition of Hollywood Week, including the grueling first cuts. Now it’s on.