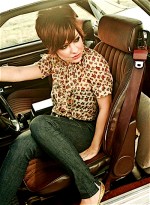 After a month of often vomit-inducing audition shows, “American Idol” finally let us have a look at some of the contestants going on to the Hollywood round–and we have some Top 24 spoilers.

Miss Seacrest said that only 181 contestants out of the more than 100,000 auditioned made it to Hollywood. Next week, the process will begin to whittle that number down to 24 – 12 boys and 12 girls.

A quick Google search will tell you who the Top 24 are – since those episodes were filmed weeks ago. The list may or may not change as the live shows approach in mid February, but I think it’s pretty accurate.

Who did we see Wednesday that made it to the Top 24? There are some potential spoilers ahead, so stop reading now if you don’t want to know.

Lacey Brown (top photo) who auditioned with “Somewhere Over the Rainbow,” is one of them. She made Top 50 last year and they chose Megan Joy instead. A huge mistake because Megan Joy was like Big Bird on crack and mostly squawked.

Lee Dewyze (second photo), who mostly hummed “Ain’t No Sunshine,” has also apparently made the Top 24, so he must get better in Hollywood. Or not.

Michael Lynch – the over-pumped personal trainer who sang a flat version of “Unchained Melody” – was rumored to be in the Top 24, but apparently a family member accidentally revealed it to the media. That’s a big no-no.

Aaron Kelly (third photo) whose parents gave him to his aunt and uncle to raise, sang Miley’s “The Climb” in a much mature voice than expected from his nerdy little body. I’m sure the tweens will be crying over him soon.

There were a couple who should have made it just for shits and giggles, including the giant 17-year-old named Adrian with a voice like a castrati and nicknames like “The Big Kahuna,” “Blondzilla and “Beautiful Man Flower.”

I also snickered over Kimberly Bishop, who was trying waaaaay too hard to look like Kristen Stewart. She sang “I Kissed A Girl” while pulling up her skirt so high, they had to put an Idol logo over her chocha.

And who should have made it for real, but apparently doesn’t was final contestant Hope Johnson, who grew up so poor she often went without food and saved part of her lunch from school so her little brother could eat. She seemed refreshingly honest and while her cover if “I Hope You Dance” wasn’t perfect, she was actually somebody you could root for. Thanks for smashing her dreams – and ours – “American Idol.”

Next week, it’s all about Ellen. See you Tuesday.