This week’s two-night edition of the “American Idol” open auditions circus begins with an apology from the show and the sweet revelation that for the first Wednesday this season, it’s only a heaven-blessed one-hour show.

The apology is for Steven Tyler’s behavior last week. It’s about freakin’ time. If only they meant it. They don’t. Cut to Pervy Grandad (top photo) telling “Idol” hopeful Jake Muck what Muck rhymes with. Ba-dum-bump. Hammering the vaudeville humor, Miss Seacrest introduces us to Austin, Texas, and the show is “ready to take the bull by the longhorns” in this “cattle call” where “even the dreams are bigger.” In Texas. Longhorns. Cattle call. Get it?

As a segue, we learn Austin is “a little bit country, a little bit rock and roll, and a whole lotta weird.” That’s followed by a quick-edit barrage of people making faces and one gay man doing his best impression of Mariah Carey having an orgasm. The judges arrive and “round everyone up” to get started.

Corey Levoy and his sister didn’t know each other existed until recently “due to parental differences,” but now they’re gal pals. Corey lights into a warbly “I Can’t Make You Love Me.” It makes us sad to hear one of our favorite songs ruined by half-ass-edness, but the judges disagree. Adjectives like “impressive” and “amazing” fly before Corey is sent on the get-your-hopes-up tour of Hollywood Week. Corey feels so good about it that he turns around and says he has a JLo Booty. He must mean fat, not shapely. JLo laughs it off; we just laugh.

Up next is 17-year-old Hollie Cavanagh. She’s a tiny little albino doing a big black song: She’s no match for Etta James’ “At Last.” Randy agrees. Hollie’s beside herself, so JLo asks her to do another song. We have to wait through a commercial break to see if the poor thing can pull it together. She does, sort of, with “I Believe I Can Fly.” Call her Hollywood Hollie.

“Good thing we came to Cowboy Country,” so we could see a slew of guys who can’t sing while wearing hats, Wranglers and boots. Enter the aptly named John Wayne Schulz (second photo), an authentic, smoking-hot ranch hand with a handsome face and a humble heart. He loves his Mama, and Brooks & Dunn’s “I Believe” makes us love him. The judges feel it too, and they invite John Wayne’s parents into the room to welcome him to Hollywood.

A string of rejections and accompanying tears flood past our field of vision. Apparently, those bad auditions weren’t funny enough, because now Adolfo Ochoa steps in to bring us back around and close “The Circle of Life” so poorly that we wince. Next.

Stalker Vision brings us into Day Two in Austin. Courtney Penry says, “Ryan Seacrest is the sexiest man alive.” We think they do a schmaltzy sequence about her love for him and excitement to meet him, but we can’t stop laughing long enough to be sure. When it’s time for Courtney’s audition, she does her impression of a chicken, and we stop laughing. Sugarland’s “Stay” is not as good as her chicken impersonation, but the judges send her to the next round anyway.

Much better, from what we’re shown, is a montage of audition clips featuring people who can sing. Shauntel Campos: Yes. Alex Carr: Yes. Caleb Johnson: Yes. No name, no name, no name and no name: Yes to you, too. Oh! Hold up! Pervy Grandad’s got a blonde in a short skirt. “Where is your pitchfork, you little devil?” Yes to her. Yes to the goth guy. Yes to the school marm. Yes to all you people we don’t have time to show.

It’s a love fest, but as Miss Seacrest so subtly points out, that’s nothing compared to Jacqueline Dunford and Nick Fink. They’re a cute couple in love. They met in their college glee club, and they want to be “Idol’s first power couple.” Move over, Finn and Rachel. Both are in, and we say they’re both so cute that, singing aside, theirs could be one of the stories of the season. 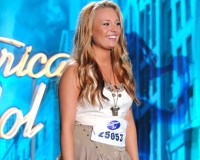 Janelle Arthur (bottom photo) will join them in Hollywood. She’s a pretty Tennessee gal with a molasses accent and a honey voice. Something about her says Top 12, and not just the “Idol”-only blogs.

This week, “Idol” changes up the open auditions formula a bit. After more passable auditions than we usually get to witness in a single episode, they save most of the dreck and weirdos for the last 10 minutes. Just say no to the girl in armadillo costume, girl wearing seven-foot wings and a Viking hat, snaggle-tooth guy, Fat Albert, dying cat, bad hair, bad outfit and the rest of the freaks and howling wolfs. If you’ve got the show recorded, hold tight to the fast-forward button through the ubiquitous sore losers who curse and push the camera guys around.

Casey Abrams wraps up the Austin auditions. He may look like he’s from Fraggle Rock, but no, he’s a melodica player. Think accordion meets harmonica. He also does a pretty mean bluesy-scat—for a Muppet. He’s off pitch several times, but his enthusiasm—and the fact that it’s happy hour for the judges—send him through to the next round, one of 50 golden ticket holders in the Lone Star State.

We’ll be back with “Idol” for more fun and hijinks Thursday in Los Angeles.