Two more hours of “American Idol” auditions Wednesday, but with a decidedly familiar locale: Atlanta. The audition show was only supposed to be an hour long, but the cancellation of Fox’s “Our Little Genius” before it even aired, allowed “Idol” to expand.

That’s an extra 30 minutes of crazy and more of tonight’s celebrity guest judge Mary J. Blige (top photo, third from right). She didn’t have much to add, but she does have an album to promote.

Last June, a reported 10,000 wannabes descended on the Georgia Dome for Season 9 auditions, and we got to see a few of them. The lucky few who made it before the judges didn’t sing at the Dome but on the top floor of the W Hotel for a dramatic city backdrop.

Soldiers of love: Mary J. couldn’t stop laughing at Dewone Robinson, who sang an original song called “We’re Not Together Anymore” that was meant for a duet, so he sang both parts—badly. And Christy Agronow hosts some cable access show called “411,” but Mary J. looked like she wanted to dial 911 after Christy’s screeching “Love is a Battlefield.”

Costume drama: Every year, someone shows up in a horrible costume and is immediately dismissed by the judges. Holly Harden showed up dressed like a guitar singing Loretta Lynn’s “You Ain’t Woman Enough to Take My Man.” Mary J. looked like she was throwing up in her mouth a little and said “I don’t’ get it,” but the other three judges put her through. She won’t survive Hollywood.

Biggest slice of cornpone: “BFFs forever” Lauren and Carmen drove up from Baxley, Ga., and must have hit some rough patch of highway because their make-up looked like it had been applied with an asphalt spreader. And their accents were even thicker. The judges put Carmen through, although she couldn’t carry a tune in a bucket, but not Lauren. The BFFs sobbed into each other’s necks, but Simon said they wouldn’t be separated for long. Snap!

A second slice: There ain’t much to do in Vanessa Wolfe’s little Tennessee town but to jump from bridges into creeks and shop at the dollar store. Her nasally version of “Wagon Wheel” was all twang and no torch. The judges all liked her, but she better enjoy the free buffet at the hotel in Hollywood before they put her back on the plane.

Biggest surprise: Bryan Walker was set up to look like a hick, douchebag cop from Tennessee, but his cover of “Superstar” was actually good. I could see him singing with a bar band, but sadly, he won’t survive the Hollywood cut.

Security Alert: Lamar Royal went in to the audition excited to meet Mary J. and hear constructive criticism. After his “torturous” (as Randy described it) cover of “Kiss From A Rose” – which sounded like he was straining for a bowel movement – Lamar got angry and had to be escorted out by security. His parting words: “Fuck y’all. Mary J. can’t sing a fucking lick, so fuck her, too. I wish Paula was here.” So do I, Lamar, so do I. 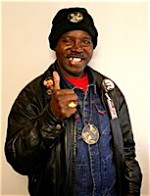 Pointless, but funny audition: At age 62, General Larry Platt (second photo) was 34 years over the “Idol” age limit, but the producers put him on for shits and giggles. He sang an original song encouraging young men to pull up their baggy pants called, appropriately, “Pants on the Ground.” Lyrical refrain: “Looking like a fool with ya pants on the ground.” The general was doing some pseudo-break dancing moves that made me worry he was going to break a hip. Simon commented that he had a feeling the song could be a hit. Okay, it wasn’t that funny.

Ones to watch in Hollywood: A tough call, because to be honest, I wasn’t in love with anybody Wednesday. Mallorie Haley, who sang “Piece of My Heart,” has a Carrie Underwood vibe, so she might do okay. Tisha Holland, shown in a montage singing Xtina’s “Impossible,” was called “one of the best” by Kara, but we only got to see 20 seconds. Jermaine Sellers’ churchified version of Joan Osborne’s “One of Us” was impressive, too.

At the end of the day, only 25 golden tickets were handed out. Next week, it’s on to Chicago.