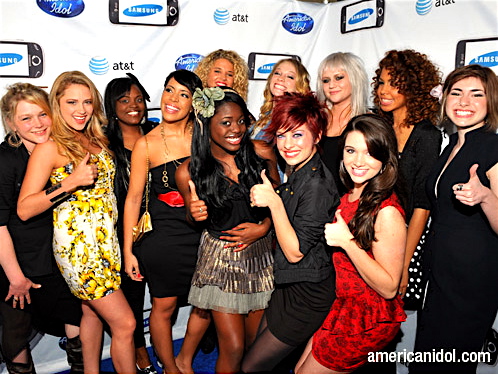 READ MORE | All of our Project ‘Idol’ Recaps from each week

Finally! The competition got under way Tuesday on “American Idol” with the Top 12 girls (top photo). For three weeks, the bottom two boys and two girls will be eliminated in a quick purge to reach the Top 12 contestants.

After Miss Seacrest opened with the usual dramatic overstatement about the winner being vaulted to superstardom (yeah, ask Taylor Hicks and Kris Allen how that’s working for them), we were “entertained” by a skit of Simon supposedly feeling Ellen up under the judge’s table. That was supposed to explain why they were sitting at opposite ends of the table, but rumor has it they aren’t getting along. Ellen, sadly, had very little to add.

We’ll be mercifully spared theme nights until the Top 12, so that means for the next three weeks the contestants can sing songs from any era of the Billboard chart. That’s more than 50 years of music for the hopefuls to slaughter.

Simon has stated publicly that he believes a girl will win this season, but judging by these performances, I’m not so sure. It was a bunch of girls trying to be Adele, Duffy, Norah, Lily, insert-retro-singer-name-here. 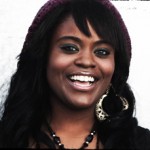 Paige Miles: While the judges were busting nuts over Paige’s performance of Free’s “All Right Now,” I thought she sounded like an airport lounge singer. She started flat, the verses were almost unintelligible, and there were waaaay too many runs. She’s going to be one of those singers who make every note a power note whether it needs to be or not.

Ashley Rodriguez:?She’s had a little more buzz than some of the other girls, so she had the opportunity to become a fast frontrunner. Sadly, she chose Leona Lewis’ “Happy,” and it was flat and pitchy. Ellen called it predictable, and Simon said she was in trouble. I think she’ll hang around another week, but she’d better pick a better song.

Janell Wheeler: The Florida wine sales rep also made a poor song choice with Heart’s “What About Love.” If you can’t sing like Ann Wilson, then you shouldn’t cover Heart, but I’m sure the ladies will appreciate the royalties. It was karaoke at best, and I’ve heard queens at Mary’s do Heart better than this. 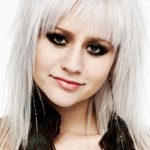 Lilly Scott: She was also given more screen time during auditions, and her back story about living out of her car and busking on the streets makes for good soundbites, but she’s not very original. Her choice of The Beatle’s more obscure “Fixing A Hole” and the talk/sing arrangement is, as Simon noted, being done by hundreds of girls on YouTube.

Katelyn Epperly: Looking like she just came from a community theatre version of “Grease,” Katelyn covered The Beatle’s “Oh, Darling.” It was an OK vocal, a little shouty, but good enough to get her through the first cut.

Haeley Vaughn: Another early favorite fell flat with a messy, mush-mouthed cover of The Beatles’ “I Wanna Hold Your Hand.” The arrangement was off, and she missed more notes than she hit. Simon thought it was “verging on terrible,” while Ellen quipped, “If it was a mess, it was a hot mess.” I don’t think that was a compliment.

Lacey Brown: Oh, honey, no…just no. I hope she didn’t quit her day job as the church event coordinator, because she’s outta there. Her weird, affected phrasing of Fleetwood Mac’s “Landslide” was nightmarish. I wanted Stevie Nicks to rush the stage and shove one of her shawls in Lacey’s piehole. 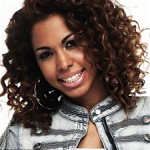 Michelle Delamor: I didn’t really remember Michelle from the auditions, but she was, without question, the most polished performer of the evening. Since she works as a corporate singer, it was obvious that she’s sang Alicia Key’s “Falling” a hundred times at the Citibank annual meeting. So, there’s where all that bailout money went. A little boring, but she’ll probably make Top 12.

Didi Benami: Working the Norah Jones vocal styling to the max, Didi’s cover of Ingrid Michaels “The Way I Am” was pleasant, but forgettable. Might be going home.

Siobhan Magnus: She’s a glassblowing apprentice and seems really sweet, but damn, she’s a bore. Her cover of Chris Isaak’s “Wicked Game” was a little too Angela on “My So-Called Life” mooning over Jordan at the prom while Rayanne got wasted in the parking lot and Rickie tried on colorful vests in the bathroom. 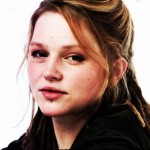 Crystal Bowersox: She’s refreshingly honest, admitting she never watched “Idol” and was doing the show for a paycheck to help her family. She has the most natural, unaffected voice of any of the girls, but I wish she’d picked a better song than Alanis’ “One Hand in My Pocket.” It was safe and too sound-alike. She’s much better than that song. And what is up with that hair? Is that a dread-mullet?

Katie Stevens: She got the pimp spot, and with “Idol” flogging her personal story about having a grandma with Alzheimer’s, Katie should have been the girl to beat. She’s 17, perky, cute and commercial – perfect for Middle America. Instead, she tried to vamp it up on “Feeling Good” and I kept flashing on Julianne Moore at a 1950s martini party.

So, who’s going home Thursday? Lacey for sure and either Didi or Siobhan. Who would you send home? Wednesday, the Top 12 boys perform.