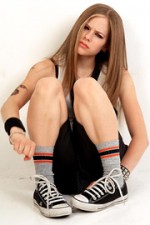 More than10, 000 showed up at the Rose Bowl to audition, and after some obligatory flirting between Simon and Miss Seacrest, we got our first look at Avril (top photo), wearing her hoodie with horns and flipping her extensions like an emo princess. After checking Wikipedia, I see that Avril is Canadian. Why does she sound like an obnoxious Valley girl?

No reality: Neil Goldstein – looking like my lesbian aunt circa 1982 – said he was geeky, vulnerable, passionate and needed to let it all out. “Like, oh my god. He’s sweating like a maniac,” Avril said, sealing Neil’s fate. He tried to be butch for a minute, refusing to leave, but then Simon threatened to have security escort him out.

Doing it for Jesus: Pastor Jim Ranger sang an original song and had a decent country/rock voice, but Avril just sneered and said his wife and three kids would hold him back. She twisted her plastic bracelets and said no, but she was overruled by the other judges and put him through to Hollywood.

Kung fu pacifist: Damien Lafavor is an avowed martial arts fan, and after some embarrassing scenes of him having a seizure on a rooftop, he flubbed the lines of “You’ve Lost That Loving Feeling” and sent himself home. Sorry, grasshopper.

More royalties for Ms. Benatar: Pat can take a year off after the number of singers covering “Love is a Battlefield” on the audition shows alone. Mary Powers dressed up like Pat, but luckily had the musical chops to back it up. Avril said she had a cool tone to her voice and was just reallllly cool. Rad.

Glamberts: There was a passel of Adam Lambert wannabes, rocking the guy-liner and emo haircut. AJ Mendoza sang Living Colour’s “Cult of Personality” like he had a bad case of lockjaw. Since AJ’s career in music seems to be over (unless Adam records the demo AJ claimed to have sent him), he could be a ventriloquist.

Cute but crazy: A cute kid named Austin Fulmer was first up when Katy Perry (second photo) took over for Avril on the second day. He sang some song in a fake British accent while wearing a hideous pleather shirt. I hate it when the cute ones turn out to be loons. Austin said he was being a man and bringing the sex. Katy wanted to know if the contestants were frisked before coming in to sing for the judges.

Who to watch for in Hollywood: Andrew “Straight outta Compton” Garcia had a soulful voice and an ugly neck tattoo, but Simon praised him as a genuinely good singer. There was also Tasha Layton – a personal assistant by day and minister by night (hmmmm…) – who did a great cover of Joss Stone’s “Baby, Baby, Baby.” Chris Golightly (bottom photo), a foster care kid who never had any love but did have Justin Guarini’s “Sideshow Bob” hairdo, was surprisingly good covering “Stand By Me,” but Katy Perry called his backstory a Lifetime movie. Ouch.

When it was all over, 22 contestants received golden tickets to Hollywood. Tomorrow night, it’s on to Dallas, where Neil Patrick Harris and a Jonas Brother will be the celebrity guest judges. Somebody better get Miss Seacrest her smelling salts, because he’ll be surrounded by gays. In Texas. And I bet it’s not his first time at the rodeo.