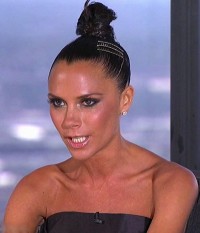 It’s the final week of audition episodes on “American Idol” before all those given golden tickets converge on Hollywood for selection of the Top 24 by the judges, including Ellen DeGeneres.

But before Cali, we had to make a stop over in Denver for another evening of auditions. While a montage was shown of all the great singers put through to Hollywood – 26 in all – we only got to see a few of them.

Victoria “Chicken Bone” Beckham was back as celebrity guest judge, looking like a dirty q-tip (top photo) and offering very little in the way of actual judging, but quite animated when it came to what the contestants were wearing. Too bad this isn’t “Project Runway.”

Not without my daughter…errr…son: Mark Labriola was kidnapped by his mother when he was four and wasn’t reunited with his father until he was 10. While Simon made a joke of his back story, it turns out that Labridoodle can actually sing. Probably won’t make the Hollywood cut, but maybe he could be a Jack Black impersonator at parties.

That Wile E. Coyote Look: With a skeezy laugh and a deep scar in his forehead, Mario Galvan sang a flat version of “Jailhouse Rock” and looked like he’d been hit in the head with an Acme anvil. All that was missing was the Road Runner zipping by. Beep Beep!

Not broken. Yet. Danelle Hayes hosts karaoke nights at nightclubs and sings in a cover band at corporate parties. She had a big, belting voice and was put through to Hollywood. Simon said he believed “Idol” was Danelle’s savior and that she would finally be allowed to be herself. He was joking, right?

Overindulged douche: Austin Paul plays football, struts around like an arrogant prick and believes he will be a star with or without “Idol.” Lucky for us, it’s without.

The great delusion: Kenny Everett said he was the male Mary J. Blige and that his singing was a public service. I guess sounding like a car alarm wailing into the night could be a public service. They almost had to call security on him after he wouldn’t stop singing his Mary J. medley. 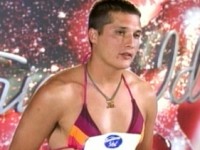 Bikini Boy: Obviously a joke after last year’s Bikini Girl became nearly ubiquitous and raised Kara’s blood pressure, Ty Hemmerling (bottom photo) put on a two-piece and strutted in for the final audition. The judges got up and left, leaving him to scratch his ass – literally. If Ty really wants a career in showbiz, I suggest drag queen because he had one of the best tuck games I’ve ever seen. He practically had a mangina.

Who to watch for in Hollywood: Single mom Kimberly Kerbow had an ugly wig, but a good voice covering “The Way I Am.” Tori Kelly, whose adorable daughter drew pictures of the judges, had a small voice singing John Mayer’s “Gravity,” but the judges loved her. Could be a case of look over talent.

Haeley Vaughn was born premature and lost her dad at age 10. She wants to be the first black pop country star, and with a little vocal training, just might make it. Nicci Nix sounds like she’s sucking on a helium tank until she starts to sing and then she has a pretty good pop voice. She flew 14 hours from Italy to make the audition, so she deserved her ticket to Hollywood for that alone.

Wednesday night appears to be one of those filler episodes where we see more highlights from all the audition cities, which means a night of feast or famine.