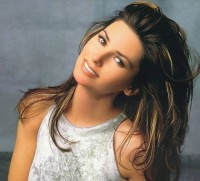 The Chicago auditions for the ninth season of “American Idol” opened with an expletive-laced montage of rejects encouraging the competition to go fuck itself. Not a promising start.

Also not promising: Shania Twain (top photo) as tonight’s celebrity guest judge. Like many a ‘mo, I shook a tail feather to “Man! I Feel Like A Woman” and “That Don’t Impress Me Much,” back in 1999. That was her heyday.

She hasn’t had a hit since 2003, but a new album must be in the pipeline. Like the previous guest judges, Shania had nothing to add, but she did admit to peeing on herself during an audition. That’s sure to excite some of you.

Dramarama: First through to Hollywood was Katelyn Epperly, whose parents were going through a messy divorce, and she was auditioning to make her mom feel better. Her cover of Duffy’s “Syrup and Honey” was reed thin, but they put her through.

Angela Martin had auditioned twice before and made it to the top 50 last season, but a sick daughter, dead feather and pesky warrants for her arrest derailed her. Third time’s a charm, obviously, because they put her through. Hope she’s paid her fines.

Boob boxing: Look up fag hag in the dictionary and Amy Lang would be there, her massive chest like the prow of a big gay ocean liner. And like any good hag, she was creaming her panties over the unavailable Miss Ryan Seacrest. After a dramatic, faux-faint and popping her boobs to the beat of “Doctor Feelgood,” the judges, mercifully, sent her back to Lane Bryant.

Sweet charity: In her introduction, we were informed that Charity Vance’s parents both do hair at home, and she was forced to sing for their clients. That’s what Supercuts in hell will be like. Her cover of “Summertime” was soulful, but she has a tiny voice that won’t take her far in Hollywood. She’ll be back to singing showtunes at the hair washing station soon enough.

Paige Dechausse, who almost died after a massive asthma attack, was also put through, despite a pitchy, substandard vocal. Keep that inhaler handy. 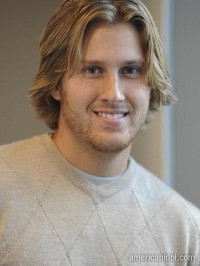 “Beautiful bottom end”: Tonight’s cuties were Nick Lynch (bottom photo) and John Park. During John’s audition, Shania was twisting the ties of her ugly blouse like an in-heat cougar while complimenting the young man on his “beautiful bottom end, nice lips and good head.” I’ll have what she’s having.

Dear Kate Bush… As you know, I’ve been a fan since puberty, so believe me when I tell you that you must never, ever again license “Idol” to let someone cover your music. Especially, when it’s Curly Newbern taking your delicate “This Woman’s Work” and making it sound like a bag of kittens being beaten against a rock. Your eternal fan, Collin.

Warning signs: Future post office gunman Brian Krause’s face-twisting “Tiptoe through the Tulips” and Harold Davis’ version of Usher’s “Nice and Slow” should have come with a warning that they might cause seizures.

Who to watch for in Hollywood: Out of 12,000 auditions, only 13 got tickets to Hollywood. Move along…nothing to see here.

For Wednesday night, it’s on to Orlando with the hilarious Kristen Chenoweth (if you didn’t see her guest spot on “Glee,” go watch it on Hulu NOW!) as the guest judge.