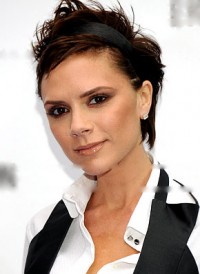 Just since my preview column published yesterday, Simon Cowell confirmed the rumors that he’s leaving “American Idol” after this season to concentrate on “The X Factor,” which, curiously, will also air on Fox in 2011.

Before Simon and his furry moobs move on to more financially lucrative pastures, we still have Season 9 to deal with. The show kicked off Tuesday with a two-hour audition show in Boston.

Since our beloved hophead Paula Abdul departed at an awkward time and Ellen DeGeneres doesn’t join the panel until February, the producers decided to fill her seat with a series of “celebrity guest judges” for the audition rounds. First up: Victoria Beckham (photo), aka Mrs. David Beckham, aka Posh Spice, aka praying mantis.

Your guess is as good as mine on how she’s relevant to popular music since she hasn’t had a hit since the Spice Girls last outing in 2000. Maybe they thought David would show up and take off his shirt? And pants.

As expected, tonight’s hopefuls were a mix of the good, the bad and the batshit crazy. First up was Janet McNamara, who most definitely fell into the latter category. She’s only been “singing well” for two years after “mastering” the “American Idol” video game. Pumping her fist, screaming “awesome” in the mirror and giving us muffin-top galore, she butchered “Pocket Full of Sunshine” in fine cat-in-a-blender form. Simon wanted to jump out the window, and I wanted to buy her clothes that fit.

One category I forgot – those who just want to be television. Case in point: Pat Ford, a pinch-faced, annoying little squirt, who kept shouting “Holla.” He sang Britney’s “Womanizer,” although the chance he’s been anywhere near a woman (or man) is debatable. Randy suggested he stop singing forever. Pat said he’d be back next season. Plenty of time to get the restraining order.

Most deluded: Japanese anime lover/kimono designer Mere Doyle who wants to be famous in Japan. Despite two vocal coaches and countless theater directors telling her she was brilliant, her take on Janis Joplin’s “Piece of My Heart” only proved that money and time had been wasted. Her mom’s eye roll really said it all.

Tied for the delusion title was Lisa Olivero, a waitress who taught herself to sing by listening to Xtina and Mariah. After shouting “Vision of Love,” the only vision I have of her is serving me endless soup and breadsticks at Olive Garden. 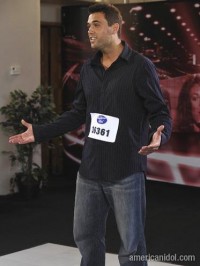 Most angry: Andrew Fenlon, an agitated future serial killer, who sort of talk/sang “House of the Rising Sun.” His attitude pissed off Kara and Posh, but by the end of the audition, Kara wanted to spank him for being naughty.

Ones to watch for in Hollywood: Ashley Rodriquez, who sang a note-perfect cover of Alicia Key’s “If I Ain’t Got You”; Katie Stevens, who made her sweet little grandma with Alzheimer’s proud with her version of “At Last”; cancer survivor Justin Williams (bottom photo), who was a little too copycat of Michael Buble on “Feeling Good,” but he’s a hunk; and Leah Laurenti, raised in an ultra-religious home (rock and pop were the devil’s music), who surely sent her parents to the prayer closet after belting “Blue Skies.”

So who were your favorites? Let’s get the discussion going in the comments section below. See you tomorrow night after the Atlanta auditions.