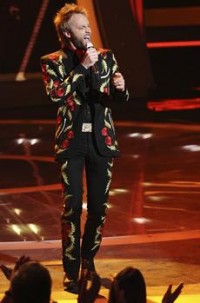 Man, I had bad dream. One of the best singers in this season’s “American Idol” was dismissed, we were left with only two female competitors, and one of them was bad-pole-dancer Haley Reinhart.

Oh, hang on. It wasn’t a nightmare; it’s reality. With the shock of Pia Toscano’s departure from last week’s show fading, “Idol” tried on Wednesday to pivot from its first somber moment of the season with an ode to the movies. Results, complete with generous contestant backtalk aimed at producer/mentor Jimmy Iovine, were broadly positive with a few exceptions.

The ever-sparkling Paul McDonald (top photo) tried his hand—and new, bedazzled outfit—with “Old Time Rock n’ Roll” and the same drunken-sailor affect he’s become known for. As his suits get thicker, his act wears more thin. I wonder if the judges are hearing and watching the same thing we are. All flash, no substance. At this point, the duds make more news than his singing.

How much more intensity can you ask from a 16 year old? I still ask that about Lauren Alaina, despite still being a fan. I don’t get the Miley Cyrus phenomenon, but I appreciate Lauren trying to put a better spin on the train-wrecky teen’s schlocky ballad, “The Climb.” Lauren shook off the Gwen Stefani makeover from hell last week and did a good job with the song. Here’s hoping she’s intentionally trying not to peak too soon, but who knows? In the backstage reaction clip after her performance, Lauren said, “The most beautiful woman in the world told me I did a good job.” For a second, I was wondering if she meant JLo or Steven Tyler.

After besting Pia in the bottom two last week, Stefano Langone bounced back with a decent rendition of “End of the Road.” His delivery is still maudlin, and it seems hard for him to connect fully. But the arrangement was terrific, and he finished pretty strong. I disagree that he can win the competition, but at least he’s not phoning it in. 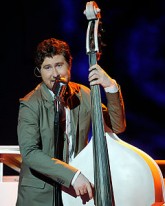 The most touching and surprising moment of the night goes to the closely-clipped Casey Abrams (second photo), where the comeback singer—given the judges’ coveted, only save of the season—went against the grain with “Nature Boy” by Nat King Cole. I wanted to see his version of the Phil Collins song that he was considering, but thank God he stuck to his guns and allowed us to see this gorgeous interpretation of a quiet number. Iovine was not happy with his advice being rejected: “He better be right,” he snipped. Well, Casey was right. The performance was restrained, melodically intricate and emotionally nuanced with a gorgeous, mysterious run at the end. Standing O from the panel and well-deserved audience ovation. We’ll see if it translates in the voting.

With the knowledge that, according to Us Weekly, Pia signed a recording contract the day after she was booted by America, and rumors flying that show producers are contemplating rule changes for next year that would aide early departures and give us more shining moments like Casey’s save, it seems that for now, the judges’ save inadvertently gave us that bonus performance from Casey.

Gasp! Alert the media: Scotty McCreery did us “Country Strong,” again, with “I Cross My Heart” by George Straight. He also “duded” will.i.am for some strange reason in the lead-in segment. The good news is that he’s certainly found his own express lane, dragging his country wagon train through every performance. The bad news is that it’s basically the same each time, albeit good, without any surprises. He’ll safely sail through with the tween vote, but I’d love to see him take more chances and be a skootch more unpredictable. 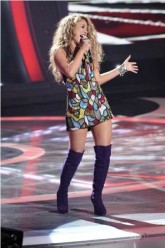 I would have urged Hailey Reinhart (bottom photo) to chose something like “Up Where we Belong” or another transformative ballad to switch things up. Instead, she chose the up-tempo “Call Me,” which was by far the most dreadful performance of the night. She looked hot, but my goodness, this was wedding singing at its worst. We were treated more to the background singers than we were to anything Haley did. Sorry: Epic fail. Definitely bottom three material, and she could be leaving us, but be prepared for her to snare some of the Pia’s votes.

Iovine picked up on the same thing I did, which was Jacob Lusk’s awkwardly condescending comments before last week’s “Man in the Mirror” performance. After taking him to task, Iovine suggested “Bridge Over Troubled Water,” which gave me mixed feelings, given how much Bebe & Cece Winans have owned the gospel interpretation of that song. Jacob seemed to approach his performance with a touch of contrition—standing still on the stage and keeping the vocal gymnastics largely in check until the end, building to crescendo. It was a nice arrangement and a cool run at the end.

Smacked down once again in the mentor session, Iovine did not appreciate James Durbin’s backtalk. “You think I’m an accident?” Iovine snapped. Bitchiness aside, James The Erstwhile Rocker stuck to his guns with Sammy Hagar’s “Heavy Metal” from the film of the same name. I don’t care for that type of music, but the performance was good, in tune and filled with energy. The backbend was hot; he definitely owned the stage.

Again, expect surprises at Thursday’s results show with the high level of performances. But expect Haley, Paul, Stefano–and possibly Jacob, too, since his support seems to have taken a bit of a hit–to be bottom dwellers. It should be a lively night, so stay tuned and good lookin’ out.