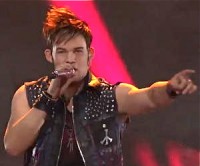 With the “American Idol” finale just three weeks away, the Top 5 took to the stage to see “who is in it to win it,” as Randy often quips. After two performances from each singer, results once again landed all over the map.

This week’s mentor Sheryl Crow was a breath of fresh air. Even providing impromptu backing vocals in rehearsal with the contestants, her ease of personality and thoughtful input was a good addition. Ultimately, she ended up motivating the contestants to think more about what they were doing.

It’s at this point in the competition that Simon Cowell is most sorely missing, not for the snarky Brit one-liners, but because his presence created a climate with a high benchmark that the contestants were constantly pushed to clear. No such benchmark exists with this panel, even though they do get feedback right occasionally.

Round One: Current Tunes
We started the night with an oft-keyless James Durbin, who was long on performance – including a Fauxhawk of Doom, pyrotechnics and lots of screeching. The “30 Seconds to Mars” tune was a good choice, but James was painfully out of tune. Somewhere in suburban Los Angeles more than a few dogs were howling. The judges were glowing with the plaudits, though, and were absolutely out of their skulls.

Jacob Lusk’s Inner Diva shows more outwardly on his glittery collars – and without good reason. Either Sheryl or Jimmy needed to step in and stop “No Air” before it ever got off the drawing board. The Jordin Sparks-Chris Brown duet was an absolutely terrible choice. Singing both parts, Jacob bombed — hard, with strange belly dancing, bad backing vocals, totally off-key, the works. I’ve been effusive in my praise of him before, but this is going to put him in deep jeopardy on Thursday. The performance called him to be contrived rather than grooving into his interpretation lane, which is taking us back to church. Swing and a miss. The worst of the night. 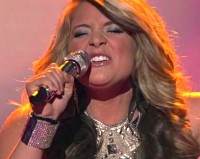 “Flat on the Floor,” the Carrie Underwood joint, was the perfect choice for Lauren Alaina. Apparently, it’s asking too much of a 16 year old to come out with the power and naked fearlessness for which this song calls. Sheryl alluded to something I’ve been saying: Lauren should stop the cheesy staging and just go behind a mic stand and do the song. She sang it well, though, and I liked it enough.

We learned that Scotty McCreery gets some of his feisty from being one-quarter Puerto Rican, and his “Gone” was definitely lively. He has worked on his performance quality, which is good, and he was on key and did a good job. He’s no longer about to eat his microphone like a hot dog, thank God, and after last night’s performance, Scotty is the one to beat. I’d still like him to stretch his range a bit more.

The Lady Gaga tune, “You and I,” was a better idea than it was a performance for Haley Reinhart. At this point in the competition, we need song interpretation to rally around, and she failed on that point, despite being generally in tune. But to quote a line from “Star Trek VI: The Undiscovered Country”: Just because you can do a thing, doesn’t mean you should do that thing.

Round One goes to Scotty with an honorable whimper, I mean mention, to Lauren.

Round Two: The Past is ‘Rising’
We got largely better results when contestants chose songs from the 1960s and ‘70s. The emotionality of “Without You” got to James in rehearsal – to the point that he had to go outside and collect himself. For most of the song, though, he kept it together on stage, showing his balladeer and warbler skills. The number wasn’t flawless, but it was “emotionally perfect,” as Randy said. Yes. It’s going too far to say that it’s James’ contest to lose, but this guy is clearly getting in touch with himself up there, which is what we’re looking for. Tears started falling from his eyes about three-quarters of the way through the song, and it was a touching moment. Not totally in tune, but touching nonetheless. 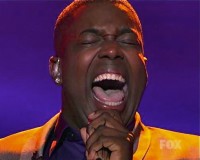 Jacob rebounded a bit with “Love Hurts,” a rock song that he had an opportunity to “bring to church” with his own spin. Sheryl gave Jacob a template to follow, suggesting a sensitive, restrained intent in the performance. Tonally, the song was better than his first, but that’s not saying much. Jacob slips into maudlin and screechy from time to time, and with the exception of his final vocal run, this number was much of the same. I’d bet the farm that it’s Jacob’s last week on the “Idol” stage.

“Unchained Melody” was another great choice for Lauren, but again she turned what should be a bold, ragged love song into an adult-contemporary song-Snuggie that was more breathless and bland than anything else. Now is the time for “Idol” contestants to blow songs out of the box, and this did not measure up. Still, the Tween vote will come in for her, and she’ll sail through.

I wonder what Elvis would have said about Scotty’s “Always on My Mind.” Now that we’re done with his off-putting hot-dog eating, we got a look at what one of Scotty’s ballads might feel like on a studio record. This performance, though, didn’t have a hook that folks look for on this show. It was sleepy and had no discernable arc. Just good, that’s all. Rave reviews from the panel, as usual. Scotty is still the one to beat at this point, given the teeny bopper speed-dial voting and glowing panel reviews. 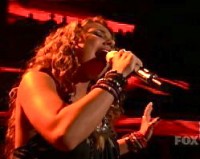 Sheryl’s note to have Haley come out and sing the first verse of “House of the Rising Sun” a Capella was possibly the best note of the season. Finding your pitch without the band is very difficult in a setting like that – particularly given past problems with in-ear monitors – and my hat goes of to the oft-maligned Haley for nailing that part of the song. We had minimal moving around – read: bad pole dancing – and all in all, she earned her standing O from the panel. She still makes dreadful fashion choices and has a strange stage persona – but her performance was by far the best of the night. And with harsh criticism in the past, it’s hard for me to even admit it.

Round two goes to Haley with an honorable mention to the emotive James. Again, look for Jacob as most likely to be excused next. With Haley occupying the final-number pimp spot, it’s virtually impossible for her to be sent home.

So, despite JLo’s drapery shears and bed hair earning her another D fashion grade, we had a general uptick in performances overall. Stay tuned for what is likely to be a lively results show– and we’ll do a full review of JLo fashions during her performance of her new single. Let’s hope she stays away from the window treatments.