Wednesday’s big “American Idol” news was that Elton John turned down a $33 million offer to take Simon’s place at the judges’ table next season. Since I’m bitchy, snarky, grumpy and an Anglophile, I’d be happy to do it for a million.

The Top 4 performed “Songs from the Cinema” last night, providing yet another Ambien moment for the nation, with Jamie Foxx handing out t-shirts to the ones he thought were the best. It was just like the ring toss at a country fair, which is where I see most of these contestants playing in a year or so.

Season 3 winner Fantasia, wearing a wig from the Justin Bieber collection, opened the show with her tepid new single, while former contestant Daughtry also had a new song to pimp. Neither of them have anything to do with movies, but they need a boost in record sales, which “Idol” can usually deliver.

Bon Jovi sang their new single “Superman Tonight,” which was meh, but it did make me nostalgic for the glory days of BJ with their big hair, tight pants and “You Give Love a Bad Name.” Sigh. I will say that Mr. BJ is still looking pretty sexy for almost 50. 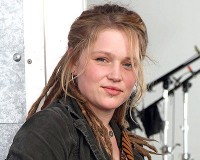 If you read the small print whizzing by at the end of each results show, you’ll see that the “bottom two” (or three) is not necessarily the case. The producers retain the right to mindfuck the audience for ratings and “drama” by putting any of the contestants on stage with whoever got the lowest number of votes.

So, when Michael Lynche and Crystal Bowersox (photos, top to bottom) were the last two standing on the stage, it was pretty obvious who was going home. Big Mike was almost sent home weeks ago, but the judges used their save option to keep him around. He’s been living on borrowed time ever since.

That leaves Mama Sox, Lee Deweezie and Cougar Bait to battle it out.

Next week, the top three go home for staged parades and concerts and will probably sing a song of their choice and one selected by the judges. That’s how it usually works.