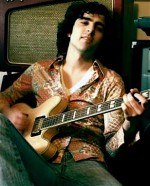 Wednesday held the official announcement of the Season 9 “American Idol” Top 24. The leaked list from Tuesday’s post was 99.9 percent correct. One off; so close!

Chris Golightly—the orphan with Sideshow Bob hair–was apparently disqualified (I’m trying to find out why) and some barely seen kid named Tim Urban has taken his place.
?
I still don’t understand how some of these people made the Top 24. How the hell did Haeley Vaughn– she of the strangled voice–beat out poor Angela Martin? Proving that the third time isn’t always a charm, she got cut again despite an epic backstory: daddy died, daughter stricken with seizures, time in jail. She’s a better singer than Haeley and deserved to be in the Top 12 girls

Tyler Grady (top photo), the mop-haired ‘70s throwback, has Jason Castro stank all over him. I see him going to the Top 10 then burning out. He’s a little too cocky, and he’s watched too many old Jim Morrison videos.

Who the hell is Lacey Brown? She made Top 50 last year, and now she’s in the Top 24. I don’t remember her, and I have a feeling I won’t be remembering her from this year either. Lilly Scott made it, too, but her jazz-tinged voice has a limited vocal range, which will hurt her during Broadway showtune week or disco diva week or whatever shitty theme they’ll foist upon the contestants–and us.

My early favorite is still Crystal Bowersox (bottom photo). She’s got a rocker girl vibe, a cute kid and a fantastic voice. Randy has already given her the name “Mama Sox,” and I cannot stop vomiting. Sigh.

The competition finally gets under way next week with the girls performing live on Tuesday and the boys on Wednesday. Get ready to dial for your favorites.

UPDATE FEB. 18: Chris Golightly was disqualified because he didn’t disclose that he was signed up to be in a boy band when he auditioned. I’m thinking he was playing up that whole sad little orphan angle.