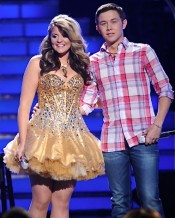 In the booming cacophony of the Nokia Theatre, Wednesday’s final “American Idol” performances felt like an aging skyscraper’s express elevator: cross your fingers, get there as quickly as you can, and to hell with all floors in between.

The night was “peppered” with a doctor’s house call, a Taio Cruz performance-abomination, crammed-in judges’ comments and a pace that left us with spinning heads and no grounded way to make a judgment about whom to choose. “Idol” producers should hang their heads in shame for retooling this to accommodate the season finale of “Glee.”

So, with the context that “Idol” needed an extra half hour to execute this show properly, Scotty McCreery and Lauren Alaina, America’s Chosen Tweens – er, I mean, Two – started the evening in vastly different places. Scotty was twinkle-eyed, bright and lithe, as usual, ready to pound on his first song. Lauren had a vocal sprain and needed attention from an odd and awkward on-stage doctor who deemed her ready to sing. More on Lauren’s voice in a minute.

Our first stop on the express elevator from hell was Scotty – singing his favorite song from the season. “Gone” was the somewhat obvious choice for him; he amped it up a bit from his earlier performance of the song, but that’s not really saying much. Scotty has been the epitome of playing it safe this season. It’s the same for Lauren, which is likely a function of Season 10 having younger souls with less life experience as the final, but no less popular, contestants.

Lauren followed Scotty with her favorite, the Carrie Underwood joint “Flat on the Floor.” It was one of the better choices from her journey through the ranks. This time, though, Lauren’s voice had a rasp and grind that was an unintentional consequence of her vocal distress. As a result, the performance, like her following two numbers, were far more exciting and gritty than she’s ever been. I hope you didn’t fall victim to the intent of the show to lower expectations for Lauren, or even frame her performances in a biased way. She sounded better than she ever has and should explore that rasp more as she goes on in her career.

“Check Yes or No” was Scotty’s second tune – chosen by his idol, George Strait. It was a decent, if unspectacular performance. Again, a very safe choice and nothing super interesting. About midway through the song, Scott curiously starting singing flat and missing some of his notes – a problem that revealed itself fully in his final song.

Lauren called on her idol, Carrie Underwood, for the choice of “Maybe It Was Memphis” for her second song. A brilliant choice, showing that Underwood’s also got a future in artist development. Lauren was dressed in this poofy cowgirl disaster that should have stayed on its hanger. Again, she served up a growl and snarl that she hasn’t shown all season. Very well done, although not sold as well as she could have, which is a familiar refrain for her this season.

After four songs and two rounds, Randy, JLo and Steven were finally allowed to chime in. In protest, I will not comment on what they said. The show producers should be strung up, tarred and feathered to stuff the judges comments into such a short and irrelevant segment. It was a huge disservice to an already challenged panel, and to us by extension. Horrible.

The train really came off the rails for the fan-written song, “Positive,” for which the duty to sing fell to Taio Cruz – sort of a lame version of Usher. The performance wandered inexplicably between full-out, auto-tuned lip syncing to live performance and back again. The moment was by far the most bizarre I’ve ever witnessed in watching this show for its entire run. What a sad way to end a genuinely interesting idea to have a “compiled” song. Just sad.

The show closed with songs chosen for the contestants by Season 10 mentor Jimmy Iovine. As both singers did their performances, video screens behind them rolled through footage of their “Idol” journey. It was a terribly distracting and pedestrian way to remember a season that will be known more for its foibles than breaking any new ground.

“This Big” was Iovine’s choice for Scotty. A safe, minimal-range song that was typical Scotty: safe, bland and boring. In this case, though, he was a full quarter-step under his notes – many of them. And none of the judges called him out on it – it was all praise. Randy talked about the “end note” that was so great, but that’s the only note he hit with any meaning or gusto. He was literally off key about 75 percent of the song, and the judges totally abandoned their critical voice to cheerlead him.

Season 10 competitive performances closed with a contestant that almost didn’t make it to the stage. Third-place finisher Haley Reinhart was actually in warm-ups to take Lauren’s place after she lost her voice earlier in the day.

How would that have gone? We were never to find out; Lauren ended up out of that drama and on the stage for her final number, “Like My Mother Does,” which was a fitting tribute to the support she had from Mom all season. “The summation of your journey” was Randy’s note, which made sense. The delivery benefited, in that ironic way, from her vocal malady.

Randy, JLo and Steven gave their edge to Lauren over Scotty for the champion spot. I’m not so sure and wouldn’t hazard a guess after the surprises of the season. It’s quite probably that the support for Scotty is still too strong for Lauren to overtake. The one takeaway from Wednesday? Vocal distress does not always portend doom for a singer in search of herself.

All in all, this episode was why the #epicfail hashtag on Twitter was created. Even after Thursday’s two-hour finale, I’ll still have smoke coming out of my ears with an eagerness to switch allegiance to “The X Factor” come fall. See you Friday for the final installment of Project “Idol” for Season 10.