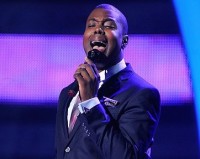 Three steps forward and one step back. That’s the best way to describe Wednesday night’s “American Idol,” where some singers were finally fitted with in-ear monitors and sang more “in the tune ballpark.”

And even though the Japan crisis weighed on the competition—the judges made a stark plea for donations at the outset—some of the performances gave us a worthy escape from reality.

Along with better notes, we had renegade lipstick smudges, a Beetlejuice jacket, an “I Nightmare of Jeannie” pantsuit and Sarah Palin fringe booties. To wit:

Three steps forward
For strong comebacks, this award goes to Lauren Alaina, Scotty McCreery, Jacob Lusk (top photo) and Stefano Langone. All basically created a new wheelhouse that they swing in, and all seemed to rise to the occasion.

Lauren, suffering from a cold, did Melissa Etheridge proud, for the most part; and Jacob, who finally had his in-ear monitor, chose the perfect song in “Alone.” I like that he chose a female song and put his twist on it, even though I still think he’s got some refining to do in his performances. Scotty in particular took a country song and elevated it out of its twang and into something more mainstream. Hit those notes, baby. 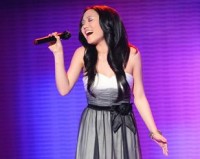 Are the vocal arrangements irritating, or is it just me? I’d be curious to know everyone’s thoughts. They are the most consistently awful feature of this competition thus far. Just because a ballad could be reconfigured as up-tempo, doesn’t mean it should. More on that in a minute.

Thia Megia (middle photo) and her “Colors of the Wind” was a bland snooze fest and could have been arranged more dramatically; Karen Rodriguez sounded like she was singing to an empty Palm Springs karaoke bar; and, most annoying was Pia Toscano’s offensive, up-tempo version of “Where Do Broken Hearts Go?”

Why, for the love of God, do arrangers feel like they need to switch up these songs? Pia has the notes and sang it well, but the arrangement was offensive to the sensibilities. Pia is one of the few “Idol” singers in recent memory who can actually tackle the big songs, so adding an uptempo swing was totally unnecessary.

Call the Fashion FBI.
Randy Jackson was sporting some sort of nonsensical jacket that looked like a Beetlejuice reject; Pia’s off-the-shoulder, Capri-parachute satin jumper was an epic fail; Karen’s Miss Moffett Barbarella number made me cringe; and Lauren Alaina’s fringe-laden moccasin boots were in keeping with her other strange choices.

In other news, Casey Abrams (bottom photo) is running the risk of becoming a caricature of himself. Look for his success to hinge on how he modulates and explores his tonal quality. His performance was screechy, staid and at times unbearable. James Durbin did a modestly good job with Bon Jovi, but he had no in-ear monitor making him tonally all over the place; and Pia did a pretty good job rising above the terrible, jazzy arrangement to hit some sultry and soaring notes.

Projections for the bottom
Karen Rodriguez–‘nuff said. Naima Adedapo’s “What’s Love” opened the show and fell flat. Hailey Reinhart’s lipstick smudgery and challenged pole-dancing movements were just awkward and off-putting. Honorable mention: Paul McDonald, who’s drunken Rod Stewart act is really getting strange. I think his sexiness will ultimately pull him through. We might see Thia in this group, too, after a fairly boring overall performance.

We have a number of really good singers this season, and I hope they step it the hell up, and break out of the bad arranging for good performances. Stay tuned for results recap tomorrow!