Project ‘Idol’: Top 11 get down to Motown 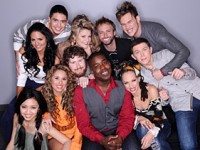 Part of the appeal for the previous nine “American Idol” seasons was the influx of outside opinions and perspectives—the rotating judges’ panel, to be sure, but also the “mentors.” That’s missing this season, and never was it more apparent than on Wednesday night.

Remember when Gladys Knight called Ruben Studdard our “Velvet Teddy Bear”? That moment wouldn’t have come if they hadn’t had another industry set of eyes on the performances. Barry Manilow was another standout – all the performances got measurably better under his stewardship.

This year, all the contrived, armchair chats with the frosted-specs Jimmy Iovine are getting tired and repetitive. I agree that his stewardship has been invaluable for some of the performers—his words to Jacob, in particular, allowed him to shine this week—but showcasing his mentoring has already passed its prime for me.

As the Top 11 (top photo) hurtles toward the Top 10 that will makeup the post-season concert tour, the scenes with random producers coming in and out have no show quality for us, the viewers. Further, isn’t it the point of these kids’ careers to know how to collaborate with big personalities, or am I just being a hater?

On that point, I might sound excessively grumpy this week, because the tree pollen in Atlanta has absolutely kicked my ass. I’m hopped up on so many drugs that I’m starting to feel like Patsy from “Absolutely Fabulous.”

Enough of that! We’ve got Motown songs to dish. 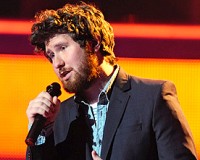 Casey Abrams (second photo) got us started with a decent rendition of “I Heard it Through the Grapevine.” Rockin’ the Abe Lincoln scruff, this guy is better than almost anyone out there—and most likely better than even he knows. I’m still not hearing the pullback in the screechy notes and intensity that so hooked us with “Georgia on My Mind” in the early rounds. Is he holding his best stuff for later? All I know is that he had an in-ear monitor this week, and I’m happy about that.

Last week was not a good week for Thia Megia, mired in a boring ballad. She reclaimed a little ground with “Heat Wave,” but that ain’t saying much. The drag-queen-eyeshadowed JLo was correct in saying that Thia should sell her performances more. She’s got a terrific voice that we’ve only begun to hear, but I’m worried we may never get the chance if she stays stuck figuring out who she is as a performer.

The sassy, flamboyant Jacob Lusk did not have the trouble Thia did in selling his wares. He elevated a gorgeous, gospel rendition of “You’re All I Need to Get By.” He killed. Best of the night. As much as I’ve criticized the judging panel in the past, they are way freer with their emotions on-stage than in past years; I loved Steven coming up to give Jacob a kiss and a hug. That would have never happened in Simon’s more conservative, button-down panel, so that was cool. Jacob even got a well-deserved Standing O from the panel. 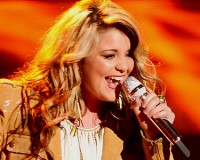 If Jacob was a tough act to follow, Lauren Alaina (third photo) stepped up with a far feistier and less inhibited “You Keep Me Hangin’ On.” She’s still figuring herself out as a performer, sometimes slipping into cheesy Palin winks and other teenaged ticks that are sort of off-putting. She sounded great and sold it well. It was a great song choice to show off her up-tempo chops. Compared to weeks past, she looked gorgeous and confident.

Great notes from the panel for Stefano Langone, who, without the emotional connection has slipped into maudlin sameness. “Hello” is a huge song, and he did it justice tonally, but Miss JLo was spot-on again, saying he should release himself from his private, closed-eye moments and invite everyone in. Performances succeed or fail based on how emotionally connected the performers are, creating a shared experience rather than simply singing in your head and letting us listen. All in all, though, a good job.

I was flying high with newly sharp judges—that is, until Haley Reinhart came out. Agreed, she’s got great pipes, but her moves are still so drunken-stripper-pole bad that I can’t focus on what I’m watching. If you close your eyes and listen, “You Really Got a Hold on Me” would be one of the night’s best. But just look at where she physically ended this bluesy, strong song: center stage, no connection to the audience. With runs and tone as good as she’s got, she should be out in the audience tearing it up.

The always-adorable Scotty McCreery (fourth photo) country-fried the Stevie Wonder classic “For Once in My Life,” with mixed results. It was fairly odd and off-putting to hear this song in that arrangement and with that flavor. And JLo and Randy were right: It wasn’t his best. I might go a step further and say he’s got to lean into his notes more, hold them, which would have added a measure of soul to his delivery.

If most of Pia Toscano’s “All in Love is Fair” performance was spot on, then her charisma in delivering it fell flat. Randy was correct to point out that she pulled it back quite a bit Wednesday night, engaging that falsetto voice effortlessly—it may look and sound easy but it’s quite difficult—so props for that. Her lacking is not just in needing to do an up-tempo number; it’s way more about delivery. Even though she’s still so great to watch, gorgeous and slinky in her black dress, she’s got to find her character while singing. She’s starting to get a little Vanna White for me.

Paul McDonald’s “Tracks of My Tears” was just OK. He communicated his signature sound and delivery, but I didn’t see anything new. That is, other than he looked like he just rolled out of bed with seriously bad hair. I think he’ll make it through because he can flash that smile and get whatever he wants. 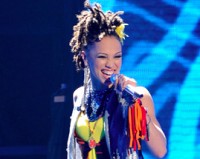 The exotic and exuberant Naima Adedapo (bottom photo) tackled “Dancing in the Streets.” It was much better than her performance last week. She was pitchy in places, but her dancing and performance quality was terrific, and that overcame her tonal problems. I’m not sure it’ll keep her from the bottom three, though.

The big, big tune “Living for the City” was the perfect song for the final “pimp spot,” and it sort of ate up James Durbin at the outset. But he fired up his cylinders to finish strong and brought the house with him. He’s a sentimental favorite, too, with the backstory of his family and living with Tourette’s syndrome. He’ll breeze through to the top 10.

In trouble: Haley, Thia, Casey and even possibly Naima, because I don’t think she has the support she should within the audience.

Wild card: Paul, who had a not-so-great performance but may get through on star quality.