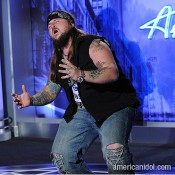 Before the opening graphics even roll on Thursday’s “American Idol,” we’re served a big gay treat so crazy that even we think it’s delicious. High school student Darius Thomas is asked to hit a high note.

Miss Thang—of the fire engine red hair, matching lipgloss, a flannel shirt, biking shorts and knee socks—strikes a chord that keeps going… and going… and going. It’s not a pretty note. It’s not singing, but it’s a high note alright. It’s amazing like a train wreck. We can’t look away. Watch the video at the bottom of this post.

If you’ve been reading, you know that we openly loathe open auditions each season on “Idol.” But we think Darius should set the standard for a new rule: If you’re going to be a clown, bring something worth watching. Roll opening sequence, and let’s get this one-hour circus underway. Thanks, Darius!

Without too much Nashville-cliché blather, we head right into the audition of dental assistant Christine McCaffrey, and when we say head right into, we mean Christine walks in singing. Well, her version of singing anyway. Think beeps and honks. She hits her mark, and the judges suggest she do cartoon voiceovers. Sadly, she attempts “I Hope You Dance,” and is roundly sent away. You’re awful and you’re a freak, Christine, but you’re no Darius. Next.

Exes Rob Bolin and Chelsee Oaks used to live and sing together as a couple. They broke up. They’re not friends, but they’re auditioning together. Rob’s gravelly–and Chelsee’s silky–solos were neither as good as their harmonized duet wrought with emotional baggage. But both are going to Hollywood. Awkward! 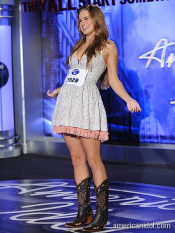 Things get “interesting” from there. A teenage girl in ruffly pink panties and another who can touch her tongue to her nose have pervy Steven’s vote. He’s just gross. Speaking of gross, this guy (top photo), whose name we didn’t catch, is an unwashed, inarticulate tattoo artist. The only thing more annoying than his interview is his singing. Next.

Miss Teen USA 2009 Stormi Henley (second photo) is a hot chick. After a year of scoring on her swimsuit and evening gown abilities, she wants to see how far she can make it on her talent. After her rendition of “Father Can You Hear Me,” Judge Pervy says she has a “beautiful… little… tight… voice.” Something tells us he’s not describing her voice. The audition is bad, but she looks good in a short dress and cowboy boots, so Steven’s a yes (duh). JLo’s a no. Randy waffles with his first “It was just OK for me” of the season, and Stormi pouts. She’s through to Hollywood.

Just a few clips of contestants who don’t make it with, by the sweet grace of all that is right and good, no video evidence of why. Adrian Beasley is a downhome black farm girl raised by white country folks who love her like their own. The judges love her quietly powerful country song; we think it’s OK. Country goes big city in the Hollywood round.

You know the best part of being 30 minutes into this open audition? It’s half over. Remember where we were at the half-hour mark on Wednesday in Milwaukee? Nowhere, that’s where. On Thursday in Nashville, we’ve seen more golden tickets, almost no cliché “Music City” clips or quotes, and only the best of the worst auditions.

Aw, poor power bottom. He is devastated, boo-hooing big sobs on Miss Seacrest’s shoulder. Now for more flashes of crying, rejected hopefuls. Let’s stop for overweight, gap-toothed Jackie Wilson. She and her torn denim mini skirt are usually found at the bar where she sings and works. We say all of it should stay there, but the judges say she’s “unbelievable,” “amazing,” and “what we’re looking for.” The singing was fine. So much for “Idol’s” renewed commitment to the “total package.” Next. 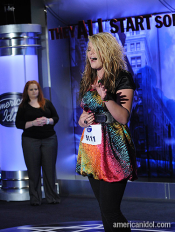 Latoya “Younique” Moore is wearing a pageant gown from the dollar store. She thinks she’s hot. She’s not. She strikes several poses. She thanks God for her Grammy before she even meets the judges. She demurely and unsettlingly speaks to them about her self-produced album. Then the dumb bitch opens her mouth to sing. Next. Still singing. Next!

A string of pretty good, but not great, auditions by male contestants make us feel a little better. Paul McDonald puts a fresh spin on Rod Stewart’s “Maggie Mae,” Jimmie Allen is a little Broadway in his delivery with fair tone and no range, and when Danny Pate serves up “Papa was a Rollin’ Stone,” the judges join in.

“Can another star emerge?” We all know that the answer is “No.” Backwater backstory: Matt Dillard is a twangy part of a family that has helped raise 700 foster children. His overalls look like they were worn by all of them. But we’re stopped short when a gospel take on Josh Grobin’s “You Lift Me Up” comes out of his toothless face. JLo can’t see past the look, but Randy and Steven see potential.

Lauren Alaina (bottom photo) is from Rossville, Ga. She is 15, and her cousin Holly was previously treated for a brain tumor. Other than terrible taste in rainbow (bottom photo), Lauren is kinda cute in that peach pie sorta way. Her singing style is unoriginal but her voice pretty much on key. The judges are blown away. In rare foreshadowing, Miss Seacrest says that this is just the beginning of Lauren’s journey, and Steven Tyler, in an unusually un-pedophile moment, says that he thinks they found “the one.”

Lauren cries. Cousin Holly cries. Mama and Daddy cry. JLo cries. Grandma teeters in place slightly, but we assume she’s happy about it. And we’re crying for joy that we’re one step closer to Hollywood Week and the beginning of the real competition. In the meantime, the circus comes to town in Austin next Wednesday. See you there.