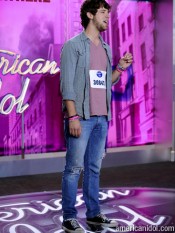 The second hour of this week’s “American Idol” open auditions come to us from L.A., with high hopes that being physically close to Hollywood means we’re closer to Hollywood Week.

A review of winning auditions from the past two weeks increases our hopes that we’re almost out of the clown circus portion of Season 10. The feeling of survival is palpable. Our relief turns to dread when we’re told that more open auditions take place in San Francisco next Wednesday. Well, let’s see if the City of Angels will bless us.

Victoria Garrett sees signs from God. The Big Man Up in the Sky sent “Idol” to Los Angeles not just to find her a spot on the show, but to deliver her as the next winner. Well, we were certainly wishing for Divine Intervention when she started singing, but lightning bolts didn’t strike her down. Next up, Tim Halperin (top photo) is JLo’s biggest fan, and he hearkens one of her bigger hits by promising that his “love don’t cost a thing.” But there may be some sex appeal under the boychismo, and he can sing a bit. Tim is headed across the street to Hollywood Week, and if the blogosphere has it right, we may be seeing more of him this season.

You know those fast-motion sequences that show you a skyline going from morning to night and back again in 20 seconds? That’s our view of the audition room with an insightful voiceover: “L.A. plays host to a stream of auditions, some good, some bad.” Justin Carter is one of the good ones, supposedly. Since we were spared from quite so much foolishness on Wednesday, clown college kicks into high gear for several minutes. Your cue to fast-forward comes when Miss Seacrest says, “Things get crazy and out of hand in L.A., and the judges try to wrestle it back.” Press and hold, friends. Trust: Don’t punish yourself. If you enjoy 45-year-old men trying to break dance or teenagers acting a fool, watch if you must. 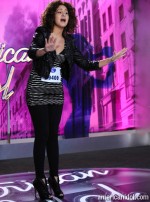 JLo doesn’t appear hopeful. “We just have to find one, one ‘Idol,’ so hopefully they’ll walk through the door today.” Set that bar high, Jennifer. Thanks. In a twist this year, thousands of MySpace auditioners—because everyone who’s anyone is on MySpace, not Facebook, right?—were whittled down to a select few to appear here. One of them, Karen Rodriguez (middle photo), sings well enough to pass the judges, but we say her voice brings the Bad Hurt. By the way, MySpace and Fox are both Murdoch-owned entities, hence the throwback.

Daniel Gomez and Isaac Rodriguez are buddies who believe in each other. But each believes in himself more. After hyping his talent, Daniel sucks. After lying to his mom and quitting school to audition, Isaac sucks even more than Daniel. We’re wishing for the fast-motion sequence, but “Idol” makes it linger. Randy tells them both to never sing again, but producers see fit to have them sing together after their rejections.

Belly dancer Heidi Kzahm entertains Pervy Grandad with a dance before she sings “Yes I Am” for her golden ticket. Steven Tyler’s leers are seeping over toward Randy. JLo tells them both to let it go.

Jersey Girl Tynisha Roches says she’s the next “American Idol.” She’s not. Matt “Big Stats” Frankel says he’s a record producer with a Hip-Hop alter-ego. He’s not. “Idol” acts like it’s a good idea to allot extended airtime for the ridiculata. It’s not. More than 45 minutes into this hour-long episode, and we’ve seen three passes to Hollywood Week. Three.

Mark and Aaron Gutierrez are stylin’ brothers. Their “Lean On Me” is unoriginal but in key. The boys are easy on the eyes, too, so they become golden ticket holders numbers four and five. Steven calls it God-like. It’s not, but the reference brings us back around to the spiritual place where the episode began. We thank our lucky stars that this round of the season is almost over.

Oh no. Spoke too soon. Cheesy graphics of fake lightning strike in the background, and the Human Tornado (bottom photo) enters as the last clown out of the clown car this episode. Think “Pants On the Ground” for 2011. Think James Brown and Bootsy Collins had an untalented lovechild. Think we’ll have to come back next week for another installment.