By Staff Author
May 26, 2011
Add this share
READ MORE | View all of our Project “Idol” recaps from each episode this season and last 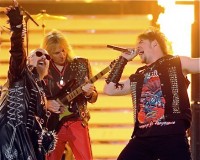 “American Idol” finales are usually enormous spectacles – larger-than-life celebrity appearances, good surprises, emotion and tantalizing performances that bring the season to its best conclusion. Thursday was not one of them.

Who would have thought an “Idol” season replete with gay culture and themes would turn out to be the worst in its history?

So, if you were betting on a “jump the shark” theme here, you’re in luck. Last night capped off a whole season of cheese without a sense of focus, order or soul. Compared to all nine previous finales–sad but true, I’ve watched them all–this was like a bad version of the American Music Awards.

(Not) Gaga for group numbers. I’ve railed against group numbers all season, and yet that’s right where the finale began. Let’s just say that the background singers were busy facilitating the schlocky, meaningless choreography. Save that shit for the tour, man. Singing to track, meaningless and lame. Next.

Giving metal a chance? We could see something like this coming: James Durbin and Judas Priest (top photo) took the stage for a rock revival. Not my style of music, but “Breakin’ the Law” seemed to hit the mark it wanted to. The judges were easy with their standing ovations last night, and this performance earned the first of the night for reasons lost on me.

A look back with the judges. Let’s knock these all out at once: If the panel had been more impactful this season, these segments might have resonated more. Randy was first, and his repetitive “In it to win it” clips were telling in that he was ready to coronate too many contestants. Segments on Steven and JLo followed later, and that’s all there is to say about it. Steven was bleeped a lot, and Mr. JLo, Marc Anthony, pretended to be jealous of folks ogling his smoking-hot wife. Sure, when she’s dressed well, which she was last night – Grade: A. 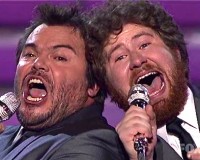 Screechy meets Scruffy. Casey Abrams’ duet with the puffy and scruffy Jack Black (second photo) – who treated us to the most disturbing crotch shot of the season – earned a “FF” on the DVR. Unwatchable. Casey lost his original “Georgia on My Mind” flair early on in the season, and this performance paints him again in a screechy, useless light. Jack was pitching a movie? I’m shocked.

Back to church and off-key. In one of the better pairings of the night in concept, Jacob Lusk took to the stage with Kirk Franklin on “I Smile,” a churning gospel joint. The vocals could have been better, but Gladys Knight added a measure of star power and vocal oomph when she stepped into the number. Ditto that with the addition of the gospel choir, which seemed largely piped in and not live. Again, I love how the “singing” competition runs on vocal track as much as it does. The ever-fabulous Jacob was more off-key than on.

Ladies of Idol. A terrible tribute to Beyonce, which ended up as just a tease of Pia Toscano. We needed more of her. After a series of terrible stage movement and affected ballads, Beyoncé joined them, saved the number, and put the girls to shame. 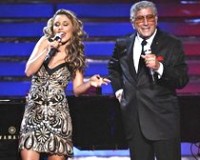 Haley & Grandpops. Oh, I meant Tony Bennett, sorry. It was a shoulder-shrug of a pairing (third photo). They should have gone in more of a B.B. King direction so Haley could work her growl. Not so much.

Should have “scrubbed” the TLC appearance. As much as this group was back in the day, it’s hard to find a compelling reason to have TLC perform, less the “L” of course – Lisa “Left Eye” Lopes after her death in a 2002 car accident. Maybe it’s good to keep the flame alive after that tragic accident, but really – I didn’t get it. Terrible backing vocals from the “Idol” ladies, too. 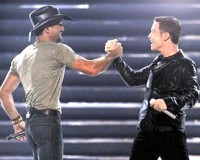 Off-key, country-fried and forgettable. OK, we get it – Tim McGraw is in good shape. Two percent body fat, yadda yadda. Still, he performed a boring, unremarkable duet with Scotty (fourth photo). Was it too much to ask to throw some curve balls in the show? “Live Like You Were Dyin’” was predictable, off-key and lame.

Arrrriba! The wheels really started coming off the wagon with a Latino/salsa number by Marc Anthony, flanked by his wife, who channeled her “In Living Color” Fly Girl days with what can only be denounced as Flamenco-Hooters dancing, fringe-twirling, ass-shaking hell. It was great to see Sheila E again, known for turning the Prince joint “The Glamorous Life” into a memorable song that launched her solo career. Aside from her, next.

The guys’ turn. Decked out in all black, Stefano Langone’s rendition of “Kiss” was semi-surprising in a good way. The rest of it was a hapless precursor to the also-lame Tom Jones, who looked his bronzen, graying self and seemed to be barely able to hold his own vocally. He sort of chirped and barked his songs. Like Gladys Knight, he’s a fixture in Vegas and probably always will be at this point.

Ford music video. The thanks-be-to-God last Ford music video led to an entire segment about a Ford giveaway to Scotty and Lauren’s teachers. See my closing comment about the full-bore, selling out of “Idol” this season.

Gaga for “Edge of Glory.” The one bright spot of last night, Lady Gaga – who fired up the bedazzler as she got her S&M Jar Jar Binks on – stood atop a faux rock formation in a high-concept, small-dance-platform production that featured a good vocal and a surprisingly hot and sexy dance segment with her dance partner. Clarence Clemmons accompanied on the sax, although you couldn’t see him all that much. Gaga and hot dancer ultimately jumped to their death together to close what was a dramatic and fun number. 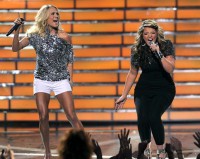 The return of Carrie Underwood. “Before He Cheats,” Lauren Alaina’s duet with Underwood (fifth photo), should have been more compeling, but all it did was create nostalgia for the days when singers were held to a different standard and we had a more mature, fearless quality to “Idol.” Simon Cowell predicted that Carrie Underwood would be the show’s top producer after she won Season Four, and that forecast came through and then some. On Thursday, Carrie went too crazy with the leg bronzer, making her gams looked about seven shades darker than the rest of her. Still, she sounded phenomenal and has 100 percent found her niche and knows who she is as an artist. I wonder if Lauren or Scotty will be in the same spot in five years.

Beyonce breaks it down. With “One Plus One,” the heavily-managed career of this solo artist came full circle with a maudlin song, but I will begrudgingly say I liked her almost operatic tone in the song’s most poignant moment. I’m not a fan, but I didn’t hate this number. She too often seems like a product and not a real person.

Spiderman: Turn Off the Dark (aka, “Have the Ambulance Ready”). God bless the erstwhile Bono & Co. This number bore no relation to “Idol” other than the lead of the show was as twinktacular as they come, appealing to the show’s base. Spidey stuntmen were strung up from the ceiling, and we all held our breath that they wouldn’t crash into Jennifer Love Hewitt, who was among the many celebrities in the audience.

Last time: Sell, sell, sell. Following a trailer for the new X-Men movie, we were asked to sit through a long, long preview of “New Girl,” a Fox show that looks seriously D.O.A., starring the ice-blue eyed Zooey Deschanel. Here we are, awaiting the big results of the season, and we had to sit through this absolute blather of a promo. Lame.

And the winner is… After a predictable, forgettable and poorly placed solo number by Steven Tyler – and amidst Seacrest’s reneging on his promise not to go over time for DVR purposes (7 minutes in change, to be exact)– the winner was revealed: Scotty McCreery (bottom photo). As predicted, Scotty overcame a lackluster finish in Wednesday’s performance finale to take the trophy. Yes, they actually had a trophy this year.

After some body language and kissy-kissies, and Scotty saying “we’ll be together from now on” about Lauren, blogs were afire about a possible romantic connection between the two teens. Even Atlanta gay icon Melissa Carter tweeted the same thing: budding chemistry. Hey, they’re around the same age, so who knows? We could end up calling them “show sweethearts” in the future. Scotty closed the show with “This Big,” and streamers and confetti rained down at the end as he just sat down on the stage and cried.

To sum up this season, we were puppets to a product and promotional juggernaut – not a singing competition. We were sold albums, Fox personalities and movies, cars, Coke, AT&T, forthcoming TV shows and so much more. That’s to say nothing of the standard commercials. The singing took the very back seat to all that other sales crap. Sigh.

“Idol” – now competing with “The Voice,” “X Factor” and whatever else comes down the pike, including a show in conceptual development by Seacrest for NBC – is going to have to make some major format, judging and conceptual changes in order to stay relevant.

Here’s an idea: Go back to the singing. Return to the emotion of the performance. Stop trying to sell shit to people. Hire a consultant, too, because the producers clearly think they’ve got a lasting formula and could use an outside voice instead of all the “yes” men and women. Fox may rake in the dough hand over fist, but it leaves viewers wanting and unsatisfied.

Thanks for reading, have a terrific summer, stay away from the leg bronzer, watch out for falling Spideys, and good lookin’ out.

The City of Atlanta once again earned a perfect-or-better score on the Human Rights Campaign’s Municipal Equality Index for 2021. Other Georgia cities made...
Read more
Photos

One event series started as a shout out to gay bears in Atlanta grew into a cacophony over the last dozen years.  If the...
Read more
Q Events