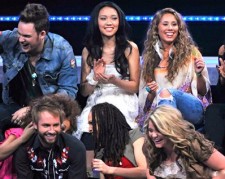 Another contestant was sent packing on Thursday’s “American Idol” results show, but not before the requisite Ford video, a slightly improved group number and a smattering of “Idol” drama.

Using the FF button generously Thursday night, I missed the always-dreadful Ford Music Video, most of the number by last year’s winner Lee DeWyze—the first 30 seconds were dreadful—and the Black Eyed Peas guest peroformance was, oy, I don’t even know how to describe that awful mess.

I’m a huge fan of “Where is the Love,” Black Eyed Peas’ signature anthem, but their songwriting has devolved into this techno-rap mishmash that is lost on me. And I don’t usually comment on stuff about plastic surgery, but Fergie looked dramatically different to me last night. Almost like a different person. After some Googling, it looks like rumors about her “work” abound, so it’s not just me.

In-ear monitor update. Even JLo mentioned the hearing and monitor problems on the show last night, urging the contestants to make sure they can hear themselves during performances. The usage of the monitors was sporadic, and the folks who used them sounded way better than those who didn’t.

Group number gets a notch better. Even though the group (top photo) was blatantly singing to track yet again during the chorus—producers admitted as much to the NY Times in 2009—they actually sang during their individual verses of the “Born This Way” mash-up song. I’m shocked to say that the arrangement was clever, but I’m renewing my deep objection to using prerecorded tracks to help facilitate the cheeseball, awful group numbers.

“Idol” is Twitter-riffic. This is the first year that “Idol” contestants have Twitter feeds. MSNBC reports that the bottom three this week—Naima, Haley and the ill-fated Karen Rodriguez (bottom photo)—are also the three with the fewest number of Twitter followers. Even without that insight, they are the three who I predicted would hit the skids in the performance-night review.

Using that measure, Jacob “Lovely Luther” Lusk better start getting at his Tweets more. He has the lowest number of followers of the rest of the contestants, according to the report.

Dim the lights. In the end, it’s muchas gracias, Karen, y adios. The multi-lingual Beehive Barbarella diva was sent packing by “American Idol” voters and not “saved” by the judges, although that vote wasn’t unanimous.

I’ll give you one guess as to whom that one judge was: JLo apparently dissented, shaking her head as the vote was delivered, and appeared moved by Karen’s last-gasp performance. But clearer heads prevailed with Randy and Steven, and she was excused.