Oscar winner and R&B star Jamie Foxx was a mentor last year on “American Idol,” and Miss Seacrest said he made such an impact that they invited him back Tuesday for the Top 4’s “Songs of the Cinema.” I have absolutely no memory of Foxx on the show last year; so much for “impact.”

Anysnooze, since there’s only four left, “Idol” decided they should sing individual songs and pair up for duets. Whatever it takes to stretch out the show for an hour, I guess.

Speaking of stretching, Lady Gaga was pissed at Fox and “Idol” last week after they edited her performance of “Alejandro.” I told you they sucked the hot out of her, and she agreed. 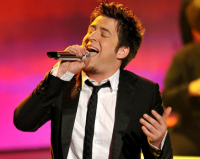 Lee Dewyze: Deweezie struggled through Seal’s “Kiss From a Rose,” possibly the only good thing about the shitty “Batman Forever.” He murdered the falsetto and sang in his usual gruff, one note way. It wasn’t even good karaoke.

Michael Lynche: “Free Willy”? Seriously? Big Mike covered Michael Jackson’s treacly “Will You Be There” backed by a gospel choir. It was a bore. Even Jamie Foxx had his doubts during the run through. I have a feeling “Idol” will be freeing Mike from its stage tomorrow night.

Lee Dewyze and Crystal Bowersox: They faced each other with dueling guitars and butchered the elegant, Oscar-winning “Falling Slowly” from the film, “Once.” Deweezie snarled, Mama Sox yelled and their chemistry level was in the negative numbers. Dreadful. The pimping by the judges was jaw-dropping. Obviously, they never heard the original.

Casey James: Cougar Bait picked the appropriate “Mrs. Robinson” from “The Graduate” (about an older woman seducing a young guy). He totally sapped the song of its energy and mojo with an acoustic performance that verged on Tiny Tim. All the Mrs. Robinsons better take their hands out of their panties and start dialing Casey’s numbers, because coo-coo-cachoo he’s in the bottom two with Big Mike.

Crystal Bowersox: Mama Sox’s decision to cover Kenny Loggin’s “I’m Alright” from “Caddyshack” sounded like a seriously bad idea. However, she turned the nearly cliché ‘80s pop song into a bluesy jam, proving Crystal is the true artist in this mediocre season. As Ellen said, she made it better than the original.

Michael Lynche and Casey James: More dueling guitars, this time on Bryan Adams’ diabetic coma-inducing “Have You Ever Loved a Woman.” Ellen acknowledged that she had, in fact, loved a woman (insert eye roll here), while Kara and Simon declared that the duets were better than the solo performances tonight. They must be smoking dope during the commercial breaks.