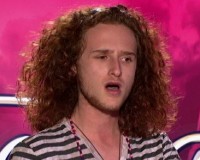 You know the type. The style-conscious douchebags who say they read “Playboy” for the articles? Well… I always try to excuse myself for watching “American Idol” just for the singing.

Which is true – I could give two shits about Ford music videos or cheesy, lip-synced group numbers or vapid celebrity mentors—Avril Lavigne? Really?—or how many extra Cokes they sell. Give me the good singing, or give me nuttin.

With that in mind, I promise to give it to you straight. Or gay, rather. In my “analysis” (air quoting, for sure), I’ll talk about the singing, fashions, emotion and presentation with hopefully some good snark mixed in.

Our current judging panel has been the saddest, weakest thing yet in a Season 10 that has actually surprised me in its emotional impact. Steven Tyler, Jennifer Lopez and Randy Jackson are like Ru Paul with no make-up: unpolished and out of sorts. I hope one of them—Randy, mostly—steps up to anchor the panel. Some of the surprisingly poignant backstories have been overshadowed by the willowy-coiffed Steven Tyler and his F-bombs, JLo’s ever-changing fashions like the cancer-patient look and her strange habit of looking off-stage left when making a point.

But now it’s finally Hollywood week, and we can leave the shitty singing and unhinged panel behind and start to get to work. So… who do we like? In the group of 327 singers who made it to Hollywood, the show cut half on Thursday. Here is a round-up—the good, bad and the technicolor:

Brett Lowenstern (top photo): An odd, shrinky-dink Carrot Top, if you will. He was the object of bullying as a kid and seemed to be paralyzed at first when he took the stage. But he pulled it together for a “Let it Be” rendition that was chill-worthy and officially put his victimhood to bed. He could be a dark horse if he can maintain.

Thia Megia: The strangely named contestant broke Rule No. 1 of “Idol”: don’t wear a Technicolor Dreamcoat and then proceed to murder the classic “Summertime.” Oy. Hers was an awful, mid-tempo version of the song, but she made the cut somehow.

Victoria Huggins: Toothy and phony-spunky. Not sure why they highlighted her from the beginning. Her audition fell flat, and she’s on her way back home. 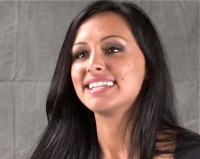 Paris Tassin (middle photo): Unless you’re Kelly Clarkson, don’t even go near a Celine song, particularly the “It sank, get over it” “Titanic” theme. It’s just a super-bad idea, for so many reasons. Same note to Stormi Henley – pretty girl, but don’t sing Sugarland and expect to make it your own. Jennifer Nettles sets the bar too damn high.

I’d say the same for the odd and off-beat Chris Medina, whose fiancé was paralyzed in an accident. He tried a Jason Mraz tune that didn’t measure up. Still, he sounded decent and got through – with some understandable waterworks afterward.

Lauren Alaina: Clearly in her element, still, even with the pressure of Hollywood and her younger years. She was far and away my fave from the early rounds. Natural voice and lots of power. More, please. My early pick for the top three.

Jacee Badeaux (pure voice), Robbie Rosen (not a fave but sounded good), and Hollie Cavanagh (makeover needed, but blew it out big time), all sounded good.

The oft-mohawked James Durbin (bottom photo): I never got Adam Lambert completely, but this guy seems sort of in the same vein, perhaps putting on fewer airs and awfully cute. Adorable, even. He did a good job. He leaves it all out on the stage and seems to get in touch with his emotional side. A lot.

The skipping, super-gay Barbie and Ken, Nick Fink and Jacqueline Dunford, got split up when Nick didn’t make it through. He bombed his audition, and his odd pleading with the panel afterward looked desperate. If you’re gonna petition the panel for another chance, march your ass on center stage and own it. That was lame.

Scottie McCreary: The twinkle-eyed country boy is another early fave. (Penny Frulla, did you notice the flip-flops in his first audition? It does happen.) However, singers should not recycle previous auditions. Lame. Shocking, country-fried Barry White voice in an Opie package. Early pick for top three.

Jerome Bell: Completely overrated version of “Let’s Get it On.”

What would Idol be without the Snooki-wannabe Tiffany Rios? You might remember the overtanned chunky girl with the starred tits from her first audition. “I like her, she’s crazy,” JLo said. Really? I don’t get that at all, but somehow she made the first cut.

After all was sung and done, 168 contenders made the cut—just in time for the dreadful group-round next week. Thanks for reading and stay tuned.