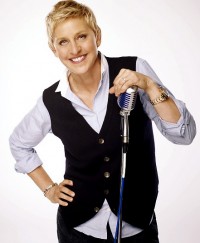 After a month of audition shows, the competition got under way Tuesday in Hollywood. Along with it, America’s favorite lesbian, Ellen DeGeneres, finally joined the judging panel.

Ellen (photo) explained her qualifications to be a judge:

“I do know what it’s like to stand on stage and please a room full of people.”

Which means a Blondie from the Clairmont Lounge could be an “American Idol” judge. Hey…not a bad idea. I wouldn’t mind a little music followed by some beer cans being crushed by massive knockers on primetime TV.

While 181 wannabes made it to Hollywood week, you’d never know it watching Tuesday’s frenetic hour full of too many commercials. With groups of eight performing in sudden death rounds –either coming back for tomorrow night’s group rounds or going home—we never met most of the people being cut, so there was no emotional attachment to worry about.

Many of the contestants who sounded good in auditions—and some who should have never made it to Hollywood in the first place (I’m looking at you, SkiiBoSki)—were shown the door quickly.

We mostly saw people who got backstories during the auditions shows. Right out of the gate, Katie “Grandma Has Alzheimer’s” Stevens and Andrew “Wants A Better Life For His Son” Garcia were put through. Hat tip to Andrew for a surprisingly good acoustic cover of Paula Abdul’s “Straight Up.” We miss you, Miss Pills!

Vanessa “I Jump Off Bridges” Wolfe sounded a little like Carol Burnett doing Eunice Higgins on “The Gong Show” (oh, my, that’s showing my age) and was sent back to Tennessee in tears.

Beatboxer Jay Stone got sent home along with Cornelius Edwards, who split his pants during auditions but couldn’t sing a note. Haeley “I Want To Be A Black Country Pop Star” Vaughn sounded terrible, too, but they let her through to the group sing. Crooner Justin “Cancer Survivor” Williams sounded shouty and moany and was given the boot.

Casey James –the hottie who took off his shirt and made Kara and Posh Spice purr like cougars at the Denver auditions—played some fantastic blues guitar and proved his ascension to Hollywood wasn’t a fluke.

Best surprise of the night was Crystal Bowersox, who went to get her son’s name tattooed on her back before going to California. That had epic Hollywood fail written all over it, but her bluesy version of “Natural Woman” had the other contestants and judges singing backup vocals. I hope she makes it.

After the cuts, 95 are left for the group sing, and those are always a messy bitchfest. Stay tuned.