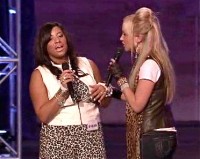 As the long episode of “American Idol” unfolded Wednesday, I kept hearing Jesse McCartney’s “Crash & Burn” playing over and over in my head. Why? The agony of group round delivered its usual shitstorm with epic flame-outs from folks across all talent spectrums.

Contrived and manipulated as parts of this show are, none are more so than this year’s group week, in which they switched up the parameters. After some groups had already formed, the producers insisted on having a mixture of Day One and Day Two contestants. This ended up causing lots of hair-on-fire, mini auditioning, scrambling, chest-thumping and seemingly superfluous social manipulations that had nothing to do with the performances. I’d rather see Mariah’s panties while singing to track on SNL than this garbage – but, admittedly, a few parts were mildly entertaining.

As the judges seemed to be channeling their badass a bit more, JLo once again didn’t disappoint with wackadoodle fashion. She looked like a bedazzled Russian ballerina who got lost from her troupe. A few of the episodes other high and lowlights:

As the Star Tits turn. Having very little to do with singing herself, Tiffany Rios—you’ll remember the star-titted, glitter-haired, braggadocios New Jersey gal who inexplicably advanced with her screeching—managed to skulk her way around the audition room, searching for a group to sing with. She looks like she’d be sticky to the touch. Anyway, she siphoned off one gal, the very pretty Jessica Yance (top photo, together), from another group and proceeded to take her down with her. We’ll never know—both Tiff and Jessica were cut, with the latter being clearly more gracious in getting sent home. 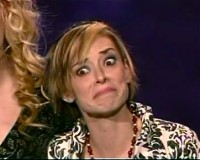 In & Out & In. It’s Ashley Sullivan’s world, apparently, and we’re just living in it. Her excessive drama continued with the waterworks and scrunchy faces (middle photo), leading to a short-lived exit from the show. After some boyfriend pep-talking, she came back and joined her groupmates in decent harmonies and an entertaining segment. They all got through.

Floaters who stayed afloat. If Tiffany was an unsuccessful floater, there were a few that actually made it through against many odds. Scotty McCreery took his Country-fried Barry White around the room, evaluating his options, and—as is typical among men who think they’re hot shit—kept shopping for the right place. He later regretted not sticking up for 15-year-old Jacee Badeaux, who became a floater himself and, as I mentioned last week, was put to the pressure-cooker test early. Jacee was kicked out of his first group but eventually found his way to a successful arrangement with the “Sugar Mommas & The Babies.” He provided the most emotional moment of the evening when he was put through—along with Brett “Gay Carrot Top” Lowenstern. Ditto that for Jordan the bossy diva, who left “440” to join “4 plus 1.” It worked for both groups, actually. They all made it through. The soulful Lauren Turner was a standout and showed a lot of moxie.

Biggest disaster. So many from which to choose, but we’ll call it a tie. The group “Spanglish,” with every single member going terribly flat and sounding awful. None of these folks should have made it through. Steven Tyler must have been smokin’ something early that morning because he accidentally put three people through. He corrected himself and chose two, although he should have passed over all of them. Murdering a Bruno Mars tune, the country group was roundly panned – Colton was the only one put through. Again, that was a stretch.

Biggest judging miss. The rest of the gals performing with the “early anointed one,” Lauren Alaina They put though other groups that were way weaker than these gals. Tight harmonies, entertaining, pretty – but overshadowed by Lauren, who seems to be the judges’ early darling.

Three was definitely a crowd. “I may look like an absolute fool,” Rob Bolin was overheard saying during rehearsal. He was right. The Exes, Rob and Chelsee Oaks—also known as the Giovanni Ribisi and Lea Thompson doppelgangers—started going in different directions when it became clear that Rob was tanking. “I’m a musician. I don’t dance with people.” Dude, you need to at least move to get through this competition. Get over yourself, seriously. So the exes with the great harmonies together ended up split, again; Jacqueline Dunford was, quite literally, atrocious. But Rob was so bad that her brothel-drapery leggings and terrible signing somehow didn’t keep her from the next round. Chelsee is a decent talent and personality, and the judges got that one right.

Teeny boppers & stage moms. Two groups decided to take on the oft-murdered Queen song, “Somebody to Love.” James Durbin, aka “Lanky Lambert Lite,” was one of two in his group (bottom photo) that got put through, but that was generous. They were all mostly terrible. The second company was a group of teens shadowed by stage moms from hell, which gave them an unfair advantage. Seriously, why didn’t Idol producers step in and stop that? Still, their gospel/R&B interpretation was excellent. Great harmonies. They got a standing ovation. Watch out for that Keonna Evans. She’s sassy, pretty and seems to have strong pipes. Reminds me of a young Tamyra Gray.

Best of the night: The a capella group with Da’quela Payne, Maima Adepapo and Jacob Lusk, et. al., had by far the best presentation, choreography and harmonies. They all went through, and they all deserved it. Jacob was called the “new star,” but Da’quela reminded me fleetingly of Jennifer Hudson. (Related sidebar: Have you noticed that the newly svelte Hudson’s picture has suddenly appeared in the “Idol” intro usually saved for the winners? Lambert and Daughtry do, too; they’ve apparently changed their practice with Season 10.)

Most annoying. In his Elton-wannabe, clown-sized white glasses, Clint Jun Gamboa screeched his way through to the next round. He was also the one who seemed to lead the charge in letting Jacee go from their earlier group. He bugs the crap outta me, but we’ll see what he does Thursday.

And with that, let’s all thank God that the group numbers are over so we can get to the actual solo singing. Watch for the next recap Friday, and I’ll pop some anti-depressants in the meantime.