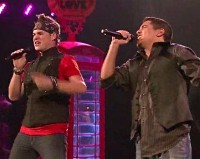 If you heard girly-squealing Wednesday, it’s because I realized that “American Idol” dipped into my childhood guilty pleasure “Star Search” and added uber-talented vocalist Peggy Blu as vocal trainer.

The so-called “Coach from Hell” drew on her best-possible diva to try and whip the singers into shape. With a number of Beatles songs pulled out of a hat by hastily grouped contestants, mixed results ensued.

Here are some of the high and lowlights:

James & Stefano (top photo): “Get Back” sounded great, even though the “Lambert Lite” act is still wearing thin for me. A decent performance.

Pia & Karen: The New York City Sisters’ rendition of “Can’t Buy Me Love” bordered on Karaoke, but the judges seemed to like it.

Haley, Naima and Jacob (middle photo): This was the performance of the evening, with perhaps Haley bringing up the rear. Naima and Jacob have fabulous tone, and together, “The Long and Winding Road” was resurrected into a harmonious gem. Nice work. Jacob was right to pull himself back – despite admonitions from the panel to tear it up.

As I predicted, “Let it Be” was part of Beatles week, but I was wrong about one thing: It wasn’t summarily murdered. Lauren rose above her far-less-talented duet partner on that song and made it bearable.

Jerome, Lakeisha and Tatynisa: They worked it out with the jumpy-gospel version of “I Saw Her Standing There.” The harmonies were OK, not the best I’ve heard, but it was still an entertaining number.

Remember, it’s crazy Ashley’s world, and we’re still living in it. Her hero is Britney Spears, so that should rank her appropriately in the hollowed halls of pop-culture. While in Vegas for Beatles week, Ashley and her boyfriend/fiancée/cheerleader got married at the same place that Brit tied her first knot with childhood buddy Jason Allen Alexander, the Little White Wedding Chapel. Despite Ashley’s joyous nuptials, her performance later faltered, and she was cut.

Melinda and Thia: They were meager and bleak with their rendition of “Here Comes the Sun.” It was the absolute wrong song choice, but Thia was once again as the tonal standout. Unfortunately, Peggy Blu’s fiery finger wagging and admonishing couldn’t save this number – as hard as she tried. 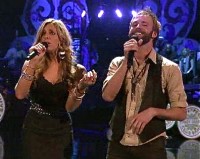 Paul and Kendra (bottom photo): “Blackbird” was terrific. I’m queer for acoustic guitar, so they had an advantage. But what they did is truly what I want all these singers to accomplish – be original. Kendra was good, but Paul was better, showing off his “soft, beautiful” voice, as if Kenny Loggins and James Blunt had a love child. Later, Paul got put through to the Top 24.

Ashley & Sophia: “We Can Work it Out” should have been rewritten with “Can’t” in the title. Terrible. Again, not a good arrangement and a poor fit for their voices.

On paper, Lauren, Scotty & Denise should have blown it out, but “Hello Goodbye” was way too much dancing and not enough singing. The “not a singers” performance comment from Randy was spot on the money. The dancing was hokey, and the singing rubbery. It was a surprising letdown from seeming frontrunners.

The Beatles performances concluded with Robbie and man-diva Jordan. It was strong on solos but short on sustained harmonies. Still, a good job as a toe-tapper and some definite bright spots.

PIMPED-OUT ‘PERP-WALKS
The largely agonizing Beatles renditions gave way to the final, “sing for your supper” moments before the panel. Not that we’d know it, though, since the solo performances and results devolved into a pimped-out perp-walk with fleeting, useless montages that prevented us from seeing how the contestants really did in their final auditions. Since we must recap, though, here’s a snippet of what we know:

Made it through: Naima went from toilet cleaner to the Top 24. She maintained consistency and even seemed to improve over time. In addition to the aforementioned Paul, Clint and his Elton glasses were put through, although with groans from this reporter. Ashton Jones once again chose a big song, “I Wanna Dance with Somebody (Who Loves Me),” a pre-Bobby Whitney tune, and after a bit of a lecture from the judges, they still put her through.

Got sent home: Besides the previously mentioned Carson, the plus-sized and diva-tacular Lakeisha didn’t make it, which bummed me out a bit. Deandre, 16 years old and complete with Amanda Marshall locks, seemed to work it out with an apparently good performance in the blurb we saw and did well on group night. I think the judges got this one wrong by sending him home, but he’ll likely try again.

The personality-challenged but emotionally resonant and absolute gentleman Chris Medina seemed to falter in his “snippetized” performance, but still retained the emotion of the song. After an affectionate moment from Steven Tyler, his exit seemed to upset the judges, especially JLo. She was inconsolable and needed support from her fellow panelists, who were all shaken given Chris’ story about his fiancé being paralyzed.

We were therefore left with a cliffhanger of sorts. Will JLo be able to go on after being emotionally wrecked by the Chris Medina verdict? Let’s hope so. Her fashions give me great material to work with.

The remaining members of the Top 24 will be revealed Thursday. See you then.