Project ‘Idol’ finale: And the winner is …

READ MORE | Project ‘Idol’ recaps from each week of Season 9 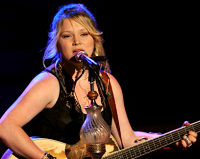 Five months and more than 40 columns later, this is the last Project “Idol” recap for the suckfest known as “American Idol 9.” Some of you thought I was bitchy and grumpy, but I appreciate you sticking with it until the bitter end.

And, lawd, was it bitter.

The two hours of my life I’ll never get back began Wednesday with a soul-destroying sellout moment by Alice Cooper, who accompanied the Top 12 on a cover of “School’s Out.” The contestants were ridiculously dressed like Catholic school kids, and then the choir came out looking like zombies. The Top 12 lip-synched, and Alice should have because he sounded like he was choking on his own phlegm.

Screaming Siobhan Magnus and Aaron Kelly joined the remaining two Bee Gees for a senior day care version of “How Deep Is Your Love.” All that was missing were pee pads and a bag of Werther’s originals.

Continuing the geriatric Idol them, Michael McDonald came out to sing “Taking it to the Streets” with Michael Lynche. Then Dane Cook came out and did a painfully unfunny bit about Simon’s nasty comments, which was followed by a bunch of the past nine season’s rejects. One of them grabbed the mike and went off on Simon, and they quickly went to commercial.

Xtina finally showed up to dust off the cobwebs, and then sang some weepy ballad from her new album. Talk about pitchy. And someone should have told homegirl to pull the massive wedgie out of her ass. 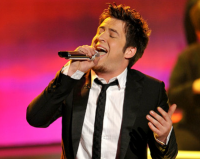 Hall & Oates came out to sprinkle some 80s nostalgia while the Top 12 guys did a medley of hits, then Crystal outsang Alanis Morisette on her hit “You Oughta Know.” Either my TV was on the fritz or Alanis was looking way too orange.

Brett Michaels, fresh from his near-death brain hemorrhage, showed up to sing “Every Rose Has Its Thorns” with Casey James. It was good to see him, and I’m glad he didn’t drop dead on stage because that would have been a major buzzkill.

Chicago did a medley with Lee singing Peter Cetera’s parts and sounding like he was howling at the moon. The old dude from Atlanta who sang “Pants on the Ground” showed up for a reprise with William Hung, the original worst Idol contestant ever.

Finally, our favorite hophead put in an appearance. Yes, Paula Abdul came back to say farewell to Simon, and it was five minutes of crazy while she rambled about her secret baby with Simon, working with superstars and dancing with cartoon cats.

Then all the previous winners of the show (minus David Cook, who was at a charity gig), and every “Idol” loser from the last nine years the producers could find, came out to sing some shitty farewell song to Simon.

Janet Jackson showed up with her head practically shaved and wearing one of Morticia Addams’ castoffs for a medley of mid-tempo snoozers. Then she did a cover of “Nasty” and totally threw shade at Paula (who choreographed and appeared in the original video) by not having her out for a dance off. Bitch.

The real irony was when Crystal and Lee came out to sing their final duet, “A Little Help from My Friends” and Lee had to sing the opening line “What would you do if I sang out of tune…” Obviously, tone-deaf America would put you in the top two on a supposed singing contest.

And then tone-deaf America would also make you the winner. Lee, who hadn’t sang a note in tune all season, beat Crystal – the only real singer the show had this year. To say she was robbed would be the understatement of the year. America proved once again it likes bland, safe, middle-of-the-road karaoke singers over real artists with a little edge.

You can have that boring fuck.

Luckily, Crystal has a big fan base and now she’s free to make the album she wants without having to compromise to pander to Middle America.

Collin. Over and out.

Editors’ Note: We would like to thank Collin for his lightning-fast dependability, his innate humor and his sometimes brutal honesty during the season. We have been grateful to have him as one of our weekly contributors and will welcome him back any time he’ll have us. Cheers, Collin!