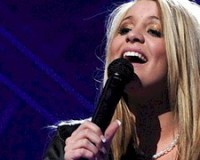 With the kind of laudable kudos he received, you’d be surprised that Thursday’s dismissed “American Idol” contestant was ever in real trouble. Which is part of “Idol’s” problem this season.

The judges’ feedback has been so falsely positive that, at times, America has virtually no help making up their minds. But from a strictly performing standpoint, 72 million votes came in this week and justice was served for the true singers of the competition.

Before we get to the results, let the requisite Thursday “Idol” schlock begin: Scotty and James kicked off the show with a duet, which is way better overall, at least conceptually. But the outcome gets tricky when half of the attempted harmonies are as off as JLo’s satin cargo Capri pants.

On the other end of the spectrum, Haley and Lauren’s badass “Gunpowder & Lead” was a toe-tapping picture of two performers who seem to embody what this show is about: growth as singers and artists. Was it perfect? No, but they looked beautiful and the harmonies were tight and crisp. Dug it.

Let the product placement begin: the contestants virtually connected with family at home using Windows 7. Big freakin’ deal. Even though the segment was an apt preview of the Top 3 returning to their hometowns as “rock stars” next week, “Idol” producers show no signs of letting up with hocking wares on the show.

As we got down to business, “The Pride of Rossville, Georgia” Lauren Alaina (top photo), was the first contestant revealed safe and into the Top 3. It was a nice development given how well she did Wednesday night and considering that she was in the bottom two last week. Plus, it was a nice teaser to wonder who’d occupy the final two spots alongside her. 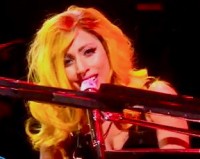 Cut to Gaga, where the neon-mustard coiffed chanteuse rocked a skimpy leather bikini and played “You and I” on video (second photo) as the contestants watched in what looked like a trailer living room. No mention of how Haley had performed the same song last week, which was odd, but no matter. Despite dripping with crazy fashion, radical makeup and single handedly keeping the Bedazzler industry in spades, Gaga can sing and perform with the best of them.

To the opposite end of the spectrum we go: Enrique Iglesias performed his “new single,” which was actually a horrific techno mash-up sampling of Lionel Richie’s “All Night Long.” Yuck. Not sure why they had his band on-stage since few, if any of them, were actually playing. I know he has a big fan base and that he’s considered a sex symbol, but all I could think about was the petulant kerfuffle that had Iglesias pulling out of his tour with Britney Spears – reportedly because he didn’t receive co-billing. Brit even Tweeted that it was a done deal, but apparently Enrique (third photo) didn’t feel appreciated enough. 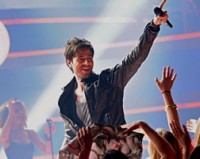 I’m of two minds when it comes to Jordin Sparks’ return to the “Idol” stage. First the bad news: “I Am Woman” is a nonsensical, awful song. She blatantly sang to track and they didn’t treat this performance with the true staging a dance track calls for. Sparks moved well, and she looked absolutely gorgeous — slimmer than usual and rocking two dresses. I’m still a huge fan of her singing despite the downgraded performance quality.

For the two Ford music videos – including the one featuring Steven Tyler – you’re on your own.

Let the “girl power” headlines commence: The next singer sent to the Top 3 was Haley – proving that, as suggested by “Project ‘Idol,'” that her boffo “I (Who Have Nothing)” performance wowed America enough to “Reinhart her way into next week,” as Steven said. At this point, we knew that two gals would be in the Top 3, and since we were left with Scotty and James, it seemed more than likely that James was going home.

Sure enough, that’s what happened. Already in tears before the results were delivered, James “Give Metal A Chance” Durbin (bottom photo) was sent home, and Scotty earned the final spot in the Top 3.

As harsh as I’ve been on him as a singer, James is a symbol of overcoming disability as someone diagnosed with Tourette’s Syndrome and high-functioning autism, and he was one of the few contestants who absolutely left his emotion on the stage each and every night — including Thursday night, which was water works central: JLo cried like a baby, as did James himself.

“I did what I came here to do,” he said, showing a lot of poise.

James sung out the evening with “Maybe I’m Amazed” and reminded us why we were rooting for him despite his vocal issues. Assuming Haley doesn’t pull back for some reason, we have three great singers in the Top 3, and it should make for an exciting next few weeks. We’ll do it all over again next week as the competition tightens toward the finale. In the meantime, good lookin’ out.