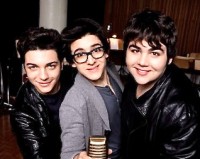 On the way there, though – and other than the Top 3’s return-home packages and the elimination results themselves – the crap showcased in this hour was useless and boring. Maybe they were scraping the bottom of the talent barrel until they blow it out next week. We can hope.

Here are the highs and lows, starting with the latter, before we get to the Top 2 results:

Flaccid performing
The two “celebrity” performances were unequivocal tragedies. Il Volo (top photo), which definitely translates to “The Three Italian Urkels,” got the ‘ol DVR fast-forward button going, despite the exhibit of some singing talent and praise-heaping from a USA Today blogger.

The buxom, bronzen and feathered Nicole Scherzinger, late of the Pussycat Dolls and new of Fox’s upcoming “The X Factor,” was equally awful. Am I just getting too old to appreciate these numbers, or are they truly trainwrecks? The show is pulling punches and saving all the great appearances for next week, right? Yeah, we’ll go with that. 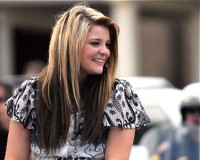 “Star Trek” nerds, “Lost” geeks and “Fringe’ fanatics probably sat through the JJ Abrams package, and at least it was different than others. The contestants receiving Super 8 cameras added a vintage-snippet quality to the return-home montages. Once again, a celebrity hocking their latest project–Abrams “Super 8” releases soon–weasels its way into the competition, but pushing your new movie is obviously thirsty work.

Top 3 high points
The three contestant packages were, all in all, short and fairly entertaining. Sailor-mouthed Haley walked by the “Idol”-issued stretch limo and didn’t realize it was hers, and then promptly cussed with delight when she realized she’d be riding in style. Her return to suburban Chicago, including shirtless male fans and a packed racetrack, was a fun ride.

Lauren had a homecoming to Rossville, Ga. (second photo), which is basically South Tennessee, right at the border. She toured the recent tornado destruction, and it brought up lots of emotion in her. It was a nice moment when Lauren met and hugged the little kid who saved his family from their house wreckage.

But it was Scotty’s package (third photo) that was the most engaging – he broke down in tears a few times, seemingly overcome by the stress of having been away and the newfound adulation that the show can bring its biggest stars. These kids are asked to go through an emotional meat grinder, and it started to show a bit for Scotty and the others, too. The very hunky Josh Turner, writer of “Your Man,” surprised Scotty on stage to sing the contestant’s favorite tune, and it was a nice moment.

Dim the lights: Results time
After week eight, I pontificated that Scotty and Lauren might be the two in the “Idol” finale. Well kids, that’s exactly what happened. 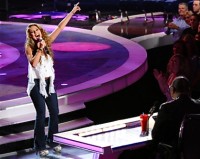 After Scotty made it through first, it came down to Lauren and Haley. After the news was delivered, Haley, looking genuinely surprised and off-balance with the verdict, recovered well and exited with moxie and good humor in her farewell reprisal of “Bennie and the Jets” (bottom photo)

As one of the folks who wrote her off early in the show, I’ll be the first to say that Haley should hold her head high without regret. She could be the most successful past-season auditioner, if not one of them, but hers is also a great comeback story overall.

We do it all one last time next week to find out who is named your next “American Idol.” Make sure to tune in Tuesday for performances and Wednesday for the two-hour finale, a shift from the rest of the season. In the meantime, good lookin’ out, and don’t be sad about missing Haley’s pole dancing.