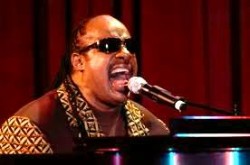 Thursday’s “American Idol” had a strange pageantry, almost like a mini finale. A bevy of surprise guests; semi-formal, black and white contestant attire; and a nail-biter that will go in the books as one of the most exciting and raucous on record.

The unusually unpredictable results show started with the kids looking awesome in their matching outfits for a group number that for the second week incorporated their live voices instead of just lip syncing. Enter Stevie Wonder (top photo) to sing with them in the second half of the number. And that was just surprise No. 1.

The performance wrapped with another treat: cake and a gift for birthday boy judge Steven Tyler. Ryan Seacrest and the other judges joined the crowded, confetti-filled stage to sing him into his new year. And that wasn’t all by any stretch.

After gimme spots were awarded without much fanfare to Scotty, Lauren and Pia as the results got started, we saw a video segment of just how much James Durbin and Paul McDonald love professional wrestling. 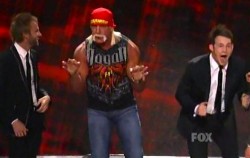 When Durbin and McDonald were called to hear their results, Hulk Hogan himself comes tearing onto the stage to deliver the good news: They’re both safe. The look on Durbin’s face was like a kid on Christmas morning (second photo).

But the real shockers were yet to come. Some highs and lows:

Marc Anthony deconstructs the in-ear monitor. This was the most puzzling and bizarre segments of the night. Any of you loyal readers of “Project ‘Idol’” this season know that I’ve been railing about the singers’ ear monitors, or lack thereof, from the beginning . It’s not that they didn’t know how to use them; they didn’t have them to begin with. While I’m sure they need some instruction on how to use them properly, “hiring” Mr. Jennifer Lopez to instruct the singers on how to fix their pitchiness and devoting a segment to it just fell completely flat, so to speak. I’m just glad they acknowledged the problem, albeit in a backhanded way.

The return of JHud. Looking glam-tacular, newly svelte and backed-up by another former “Idol” contestant George Huff, Jennifer Hudson strutted like she owned the stage. Ever since she performed “Imagine” during the early rounds of Season 3, I knew she had incredible talent; the dreadful “Where You At,” though, is not a good way to showcase it. With all the gifted songwriters out there today, you’d think they’d be able to find something better for her.

Jennifer Nettles outfit from Mars. This warrants the reverse distinction from JHud, since the song, “Stuck Like Glue” is a little ditty that’s still bouncing around my head. Unfortunately, so are Ms. Nettles’ pistachio pants, turquoise belt, and fuchsia jacket and heels. This breaks my heart because I’m a huge fan of the former local Atlanta music icon. As her stylist, I would have slapped her and sent her back to the closet. She’s one of the most gifted vocalists out there right now, but that get-up was wrong on many levels. 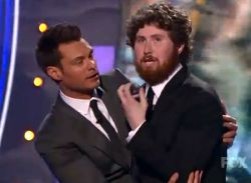 The Casey Abrams save. Ryan Seacrest hinted at the beginning that a surprising results show was afoot; he did not disappoint. The kids in the bottom three this week—Thia, Stefano and Casey—as well as a few others, are going to have to take the judges’ feedback and make it their own in order to survive in competition’s later rounds. This show is about singers who grow, improve and receive criticism as its intended: to help them be successful at their craft.

Casey definitely earned his spot in the bottom three with his lackluster performance, but he is too damn good to let go so soon. I loved how Randy waved off the music and stopped the “Sing For Your Life” performance because the judges didn’t need the time to deliberate.

Casey was shaken, shocked and seemed like he was about to go into cardiac arrest after the judges’ decision to keep him on (bottom photo). Hugging his parents was awesome, as was him dropping a few F-bombs before falling to the feet of Ryan Seacrest. It was quite the extended moment of drama.

America will very often get their “Idol” voting wrong, and they did again last night. We should be saying goodbye to Haley or Thia, but instead, we have 11 contestants going on tour, and we’ll have two people leaving next week.

From here on in, Season 10 of “Idol” will be 100 percent about who takes feedback and improves and who stays mired in their own foibles. We’ll see how it goes. Until next week, good lookin’ out!