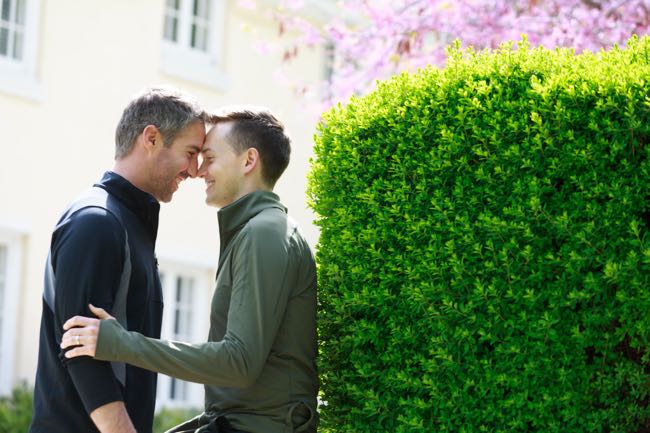 It all started with a simple request from a couple looking for a photographer.

Photographers Shalem Mathew and Mitch Kitter were approached by a lesbian couple who rejected by other local photographers because they are gay. Their problems inspired Shalem and Mitch to create a series documenting same-sex couples from their native Alaska. The result was a year-long process of shooting a diverse range of couples from across the state, and a gallery for the culmination of their work, the Love is Love Project, in 2012.

Now, Mathew and Kitter are broadening the scope of Love is Love. Earlier this year, they launched a Kickstarter campaign for $25,000 to help fund their travel to more states to photograph LGBT couples for an upcoming book. The Kickstarter proved popular – not only did they meet their goal but supporters donated $33,499, which helped fund another piece of their project – traveling across the South to photograph even more couples for the book.

That Southern swing started on Sunday as they departed Alaska for Houston, then a Tuesday stop in New Orleans before arriving in Atlanta on Wednesday. Then it's on to Charleston, S.C. (Thursday), Raleigh, N.C. (Friday) and Newport News, Va. (Saturday). The trip also includes stops in Delaware, West Virginia, Tennessee and Mississippi before wrapping up on Dec. 23.

“We are so excited to begin the next leg of the tour and start photographing couples in the Southern states. Over the next nine days, we'll be photographing 15 couples in 13 states on a whirlwind road trip,” says Kitter, who spoke to Project Q just before the couple arrived in Houston on Monday.

SO thrilled! Tonight we leave Alaska to start the next leg of the Love is Love Project. We've got some beautiful couples lined up to share their stories accords the southern states! What are you most looking forward to this holiday season?

For those who aren’t familiar with the Love is Love Project: in a nutshell, what is it?

We started the Love is Love project in 2012 in Anchorage, Alaska. After hearing about a local couple interested in photos with each other who were discriminated against, we posted on Facebook, looking for Alaska LGBT couples to photograph. In the end we photographed over 28 couples and hosted a packed gallery opening.

What led you and Shalem to pursue this project?

The entire project has grown organically for us. When we started the project, we knew of maybe two to three gay couples in Alaska. So with that in mind we expected maybe five couples to apply to be photographed. On this leg, the Southern Tour, we sorted through over 700 couple submissions. Seeing the genuine love these couples these share for each other and hearing their stories is inspiring.

The two of you married earlier this year. I assume that your relationship played a big role in the creation of this project. Marriage equality is, of course, not yet available everywhere in the U.S., but it is spreading quickly. In what ways do projects like this help increase the support for marriage equality?

It's human nature to fear the unknown. Over and over we hear, “I don't know gay/lesbian people.” We feel the Love is Love Project and other projects like it put a face on the issue. This project shares real stories of real couples that are real love. When you have a friend or family member that identifies as LGBT, it becomes harder to discriminate against them.

This project has been so wonderful for our relationship. The stories we hear and the couples we meet bring us closer to each other. On a photography note, we each have our own photographic style. When we photograph together, we each have developed a style that is totally different than our individual styles.

When this project started, marriage equality existed in less than 10 states. Now, two years later, marriage equality exists in over 50 percent of states! We figured equality might be a reality in Alaska in a few decades. To have equality now has been a beautiful surprise. We're looking forward to continue sharing stories from states that have yet to gain equality.

The Kickstarter campaign wrapped in February with you surpassing your goal. What was your reaction to the outpouring of response?

Kickstarter was an eye opening experience! We actually accidentally launched the project two days early – who knew the 'go live' button actually worked? [Laughs] We received a great initial push from our friends and family. What really pushed us over the edge was the overwhelming support we received from online publications (both mainstream and LGBT-centric.) It is humbling to have the trust of the hundreds of backers on Kickstarter. We are thankful for that trust, and can't wait to share these stories.

You two are based in Alaska, and this project has led to you traveling across the rest of the U.S. What have you learned from your travels?

The Love is Love Project is fun! Yes, there is a lot of work involved with coordinating, photographing, editing, designing, and promoting the project. But we've had so much fun traveling to all these different areas of the country. What has been most beautiful to have our expectations of certain cities blown away. With the very public marriage equality debate raging in Utah, we never expected Salt Lake City to be so much fun. Further, we've loved exploring new cities like Austin, Santa Fe and Kansas City.

You’ve been touring the country, photographing couples for the project. You started in Houston on Monday and reach Atlanta on Wednesday. Who are you shooting in both cities, and how did you select them?

As we mentioned earlier, we had over 700 couples and families apply to be a part of the project. As such we have read hundreds of wonderful stories of love and commitment. The couples we've selected have well written stories, with unique, yet relatable histories.

In Houston, we'll be photographing Michael, Shawn, and their beautiful family.

In Atlanta we're going to be photographing Andra and Katie and around downtown and at the Fox Theatre.