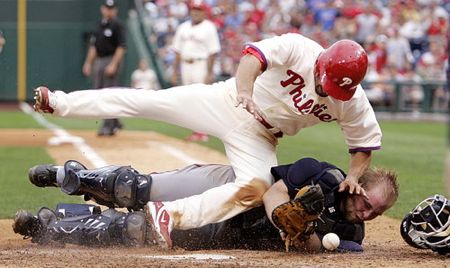 If you tuned out Atlanta’s pro sports teams this weekend, here’s what you missed:

The Braves are done. If ever there was a symbol of how the season has crashed and burned for our hometown heroes, it came yesterday in the series closer against Philadelphia. Brian McCann was knocked cold during a sixth-inning collision with Shane Victorino at home plate. As McCann fell, so did the Braves – to 49-55 and 7 ½ back.

The Falcons opened training camp with a new $10,000 sound system it the locker room, courtesy of New Kid on the Block, QB Matt Ryan. He’s one of four quarterbacks on the roster right now for the Falcons. And sports pundits are asking fans to give him a chance.

The Dream dropped two games over the weekend as they wrapped up their schedule before the month-long WNBA break for the Olympics. The Dream fell to 3-24 with the 86-76 loss to the New York Liberty in a sloppy, physical and unevenly officiated game.