Pro sports ramble: Dance with me 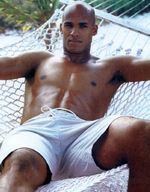 Sportswriters were busy over the weekend and here’s why:

The Atlanta Dream ended its six-game road trip with a thumping by the Phoenix Mercury late Saturday, 110-854. Not that you’d know that by reading the Atlanta Journal-Constitution, which relies on wire reports for the Dream’s road games despite sending a beat reporter to out-of-town games for every other pro sports franchise in town. But the AJC has yet to even run wire copy for Saturday’s game. Nothing. Nilche. Nada.

The Dream plays Sacramento at 11 a.m. Tuesday at Philips Arena.

Jason Taylor, the hottie pro football player, got his wish. No, not a title from “Dancing with the Stars,” but a trade from the woeful Miami Dolphins. Bill Parcells had enough of the sexy star, even if he was one of the best players on an otherwise sad, sad roster.

It’s a matter of streaks. The Braves are in Florida today to face the Marlins. But the slumping team, stuck in fourth place, hits the road having lost their last 24 road games that were decided by one run. Amazing? For this city’s pro sports teams, it’s one of many sad, sad streaks.