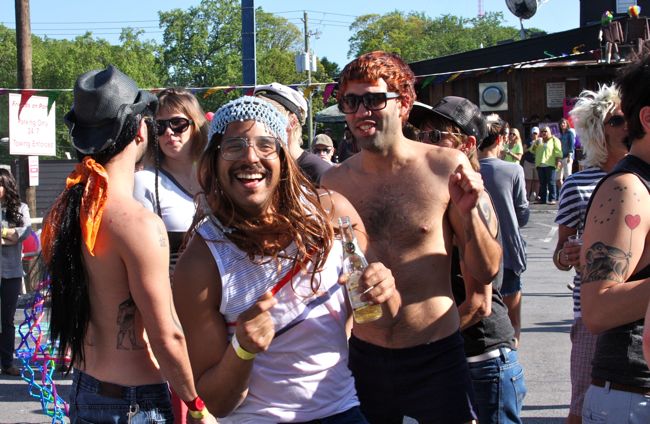 MondoHomo continued fundraising toward its queerlicious festival in May with Wigout II on Sunday afternoon at Friends On Ponce. Wigs, beer and DJ beats kept the outdoor party pumping.

The all-day event not only featured the requisite alterna-queers dancing and prancing in wigged-out wigs. Guests were also treated to drag and burlesque performances by Ruby Redd, Dax, Devin Liquor and Little Foot Jones, to name a few.

It was just the right kind of spectacle to stop traffic on Ponce de Leon Avenue and keep up the hellraising and fundraising all the way to the May 26-30 MondoHomo, a “fagalicious” LGBT arts and music festival.

DJ Homosexual—aka the gay crime fighter and former mayoral candidate Kyle Keyser (third photo left)—and DJ Vicki Powell set the festive mood, and fun carnival games hosted by the Atlanta Flaming Sugarbaker Sisters kept everyone on their toes. There was even a makeup and face-painting table helmed by the Atlanta Radical Faeries.

Wig-wearers were treated to a special MondoHomo cherry bomb, and festival organizers raised cash with sales of wigs, t-shirts and treats. MondoHomo’s now-infamous jello shots were also on hand “to make you gayer than glowing glitter balls,” which were also available for tasting.

Clear, queer? In addition to this weekends Wigout photos, you can also get an idea in our photos from the MondoHomo Beer Bust earlier this month and our photos from last year’s Mondo Homo opening night.