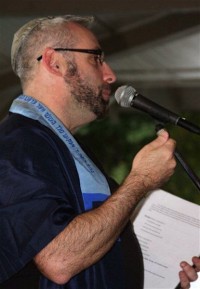 As soon as Atlanta Pride announced its 2011 festival will take place Oct. 8-9, comments and questions started flowing about the annual dates conflicting with Yom Kippur this year.

At the time that the October dates were secured, when working out dates for 2010, Pride’s biggest complaint from its partners and the community was that the festival moved around the calendar four times in as many years since 2007.

“Nearly every LGBT establishment and organization in town, including ourselves not to mention allied sponsors and donors, plan their fiscal year around the event,” Sheffield says. “At the time, we knew that we were going to have to get stable dates on the calendar. We also knew we couldn’t even consider June for three to five years. So when we were able to get the second weekend in October coinciding with National Coming Out Day, we knew we had to take action to secure those dates.”

But the conflict with Yom Kippur, which takes place Oct. 7-8, is a scenario that Sheffield says concerns the Pride Committee deeply and that they are actively working to mitigate.

“We never want to put ourselves in a position where any segment of the community feels alienated from the event, not just from an organizational standpoint but from a personal standpoint,” Sheffield says.

“In no way was it intentional, and in no way are we sitting back and saying, ‘It is what it is,’” he adds. “As soon as we realized there was a conflict for 2011, we started talking to members of the queer and Jewish community. The first call was to Rabbi Joshua Lesser [the gay leader of Congregation Bet Haverim] and pulled together a group of eight individuals about what that meant. What could we do to make this situation better?”

Vendors, the Human Rights Exhibit, and many other official events take place both days of Pride Weekend, and the big parade is on Sunday, so the first issue the group looked at was which Pride events normally happen on Friday and Saturday that could be rearranged to allow the most people to participate.

“The commitment ceremony is extremely popular,” Sheffield says. “In 2008, we made an active decision to move it to Saturday night instead of Friday night to include members of the Jewish community and have someone like Rabbi Lesser participate. This year, because of Yom Kippur, we are moving that event to be a stand-alone event during Pride Week so that we can have full participation.”

The date for Pride’s annual mass commitment ceremony has not yet been set. Lesser, who plans to help officiate the ceremony (photo at the 2010 event) and is working with Atlanta Pride, released an official statement on the date conflict.

“I appreciate Pride’s staff and board willingness to explore many different options around changing the date and alternate programming,” Lesser says in the statement. “Conflicts sometimes are unavoidable, but how people handle them is what demonstrates character and a desire to build community. Pride and Yom Kippur falling on the same weekend is disappointing, but working together will strengthen our relationships and that’s exciting and enduring.”

To that end, Friday’s VIP kickoff party take place on Oct. 7 for all sponsors or donors. A second VIP party is now in the works as well, so that everyone, including those who can’t come to the Friday party, can enjoy a VIP event.

Plans are also in the works for a Saturday Yom Kippur Break Fast service in the Piedmont Park dock area during the festival. The solitude of the dock creates the appropriate reverent atmosphere that is separate from other, potentially rowdier festival happenings that may be taking place in other parts of the park.

Pride is also looking to add even more Jewish entertainers, comedians and authors during Pride Week and on Sunday.

“We have a list of people who have participated in the past as well as others we’d like to book,” Sheffield says. “The goal is to find people who don’t just happen to be Jewish, but who have a direct connection to the queer Jewish community and who specifically addresses being gay and Jewish.”

The traditional Pride Seder, which happens at Congregation Bet Haverim each June during Stonewall Week, will be also be an official Atlanta Pride event.

“And there’s more in the works,” Sheffield assures. “We don’t look at this and say, ‘OK we’re doing these things, so no one should be offended. It’s clearly very important to a number of people. We don’t have delusions that everyone will feel better, and while we hope our efforts are appreciated, there is no doubt we will have to continue to create opportunties to make ties that are meaningful to people.”