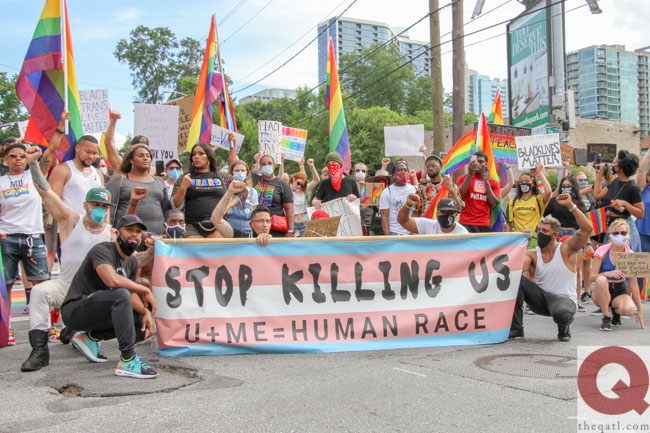 Nearly 200 people marched through Midtown on Sunday, celebrating Pride and the 51st anniversary of the Stonewall Riots while calling for justice and equality for black transgender people.

The Beauty in Colors Rally – organized by the People’s Uprising and Atlanta City Council member Antonio Brown – started at the 17th Street bridge over the Downtown Connector about 4 p.m. The marchers made their way through Midtown until they blocked the intersection of 10th Street and Piedmont Avenue – LGBTQ Atlanta’s most prominent spot, adorned with rainbow crosswalks.

“It’s about time there was an uprising happening during Pride month right now,” “Pose” actor Dyllón Burnside told the crowd. “Gone are the days of shrinking to fit inside of the boxes that white supremacy, patriarchy and capitalism have tried to confine us into.

The march included “no justice, no peace” and other chants now familiar from ongoing Atlanta protests for racial justice. On their path to the Midtown intersection, demonstrators paused for 51 seconds to commemorate the anniversary of the Stonewall Riots in 1969.

“We’re not just marching because this is a trend or fad,” Brown said. “We are doing this because we truly understand and we’re standing in solidarity with our black trans community, our white trans community – all black trans lives. Everyone.”

At the rainbow crosswalks, the march and rally turned into a block party with a DJ. Dancing in the streets lasted for a few hours, but the social justice message was always present.

“I heard us screaming ‘no justice, no peace,’ but I want that to be inclusive because when a trans person is murdered, a lot of the first questions are, ‘What is she doing? Did she trick somebody? No, she didn’t. We are desired just like anybody else. Our lives matter. Black trans lives matter,” said trans activist Toni Bryce.

One of the event organizers, DeAndre Gates, told the crowd they picked the anniversary of the Stonewall Riots – and the traditional weekend of Pride celebrations across the country – on purpose.

“It’s important to pay homage to our history and recognize our history, and today we are doing that with each and every one of you,” Gates said.

Burnside said the event also sent a message to the larger Black Lives Matter movement that has been the catalyst for weeks of racial justice and equality protests in Atlanta.

“For those who say your personal lives don’t belong in these spaces, I say the personal is political and we can not win this political struggle without your personal commitment to reclaiming the pride of this nation – which is an endeavor for life, liberty and justice for all people,” he said.

On June 7, a crowd of hundreds took part in another rally and march through Midtown to support black transgender people. That event specifically called attention to the killing of Tony McDade, a black trans man, by police in Tallahassee, Fla.

View our photo gallery from Sunday’s event below.

The Beaty in Colors Rally in Midtown on Sunday commemorated the Stonewall Riots and called for equality for black transgender people. #atlantaprotests #BlackTransLivesMatter https://t.co/JXHzsHjjYa pic.twitter.com/9obgg24z6Y