Pride in the press: Loaf gets Southern-fried 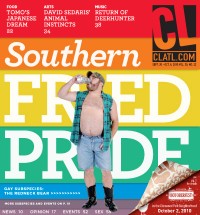 Why settle for one when you can have a three-way for Atlanta Pride? Pull your head out of the gutter—we’re talking about Creative Loafing and their trio of Southern Fried Pride covers.

The Loaf’s 64-page Sept. 30 issue includes a three-page celebration of Southern queens, which is where the paper draws its inspiration for the three covers that feature a dandy, an empowerment sister and a redneck bear. Not to mention that the cover is striped in the colors of the big homo gay flag.

The issue also includes a preview of Out on Film and a review of “Squirrel Seeks Chipmunk,” the new work from David Sedaris. Extra gay points for those. But an argument against hate crimes legislation from Roswell businessman Jim McPherson on the paper’s opinions page seems a bit out of place for a Pride issue. It’s Pride and who really wants to think that hard this weekend? 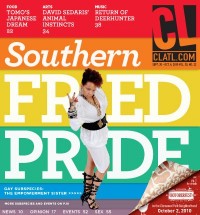 But back to Southern-fried Pride. Two words: It’s hilarious.

Where else can you tea-bag a guy one night and take him out for sweet tea the next morning?

Even seasoned Pride-goers – those of you who have been around for at least a handful of the 40 years Atlanta has seen some fashion of a Pride celebration – will enjoy the nine types of Southern queens the Loaf profiles. Homo-sapiens, indeed.

If not, you might find some humor in their Jeff Foxworthy-esque, “You might be a gay redneck if…” 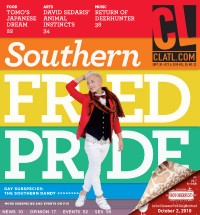 You met your last boyfriend in the Waffle House restroom.

You manscape with a hunting knife.

You root for the NASCAR driver with the cutest jumpsuit.

You wish the Indigo Girls would “shut up and sing.”

You keep a colorful stash of Speedos in your bass boat.

You root for the hillbillies in Deliverance.