Pride in the press: Biggest yet from GA Voice

READ MORE | Pride in the press: Loaf gets Southern-fried 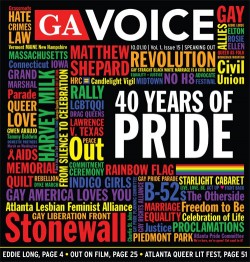 The current issue of the GA Voice will land on your table with a thud. There’s nothing quite like the occasion of a little weekend festival in the park to feed the largest issue yet of your newspaper.

The Oct. 1 edition of the every-other-week gay paper is its first Pride issue, and the staff didn’t hold back. It’s 64 pages, marking the biggest issue in the paper’s nearly seven-month history. It’s packed with 15 pages of Pride coverage, from a piece on headliner Kimberley Locke to a full schedule and even a look at dining options near Piedmont Park.

In other words, it’s the comprehensive look you’ve come to expect from the paper on the Atlanta Pride Festival. There’s even a four-page spread on Out on Film, which feeds into Pride weekend.

Our favorite part is the two-page feature outlining the 40-year history of Atlanta Pride. It traces the factoid-filled development of the event from 100 people marching down Peachtree Street in 1971 to its huge growth spurt in the 1990s and its struggles of the last few years.

While HIV struck down many in the gay community, it also radicalized many more. People who had never considered themselves activists during the gay liberation movement of the 1970s found they had no choice but to fight back when their friends were literally dying around them, and that spirit soon energized other struggles.

Jeff Graham attended his first Atlanta Pride in 1990, and remembered the thrill of being part of “the beginning of a very exciting movement.”

“I was a young street activist in the community, and Pride was really a central focus of the year back then for those of us on the frontlines of activism,” said Graham, who was a member of ACT UP, would later serve as executive director of AIDS Survival Project, and is now executive director of Georgia Equality.

“You were making a political statement just by showing up, because so few people were willing to do that. When Pride hit 5,000 people, it seemed like the largest gathering you could imagine,” he said.

Also inside the Pride package are briefs on the official events during the weekend, including the transgender and dyke marches, literary showcase and the raucous Starlight Cabaret.

So kick back, relax and brief yourself on the Pride weekend to come.