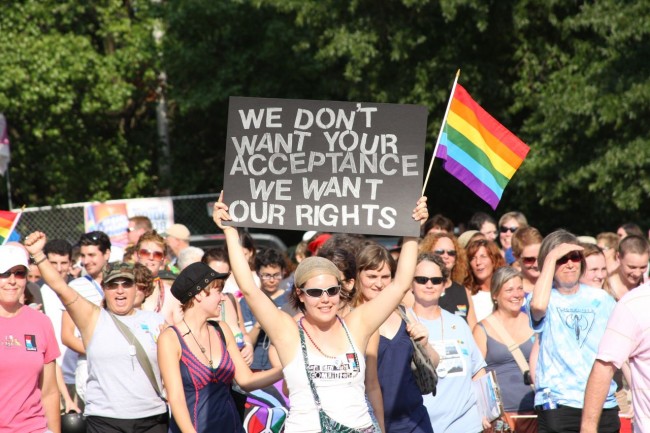 FREE TICKETS | Win a pair of tickets to the Official Pride Kickoff Party by telling us when and where you’d like to see Pride 2010. See below.

Unless you’re Sir Paul McCartney shilling for Piedmont Park’s caretakers, large-scale events were booted from the park. Until Monday when the city relented. Now Pride faces the vexing question of when to hold the festival in 2010.

But take a step back.

We’re still adjusting to Pride-O-Ween this weekend, the result of a compromise worked out between the city, parks officials and Pride. In case you don’t recall, the city said take this weekend or hold Pride somewhere other than Piedmont. The 2008 event at the Atlanta Civic Center didn’t do well in producing crowds or revenue, so Pride opted for a return to the park.

We’re not the only ones still adjusting to Pride-O-Ween, though we already have our eyes on some rainbow colored costumes for just such an occasion. Those progressive, gay-loving readers of Creative Loafing opined on Pride-O-Ween, too. The results are a little humorous and somewhat disturbing. You decide which is which.

Dr. Fifi: I’m OK with it. It’s two gay holidays together. It would be nice to have some warmer weather, but I’m just happy to be back in Piedmont Park. It’s National Coming Out Day, and National Coming Out Month in October. That has a lot of significance. I heard a lot of people are traveling to Atlanta Pride because it is in October. More people will be here. Any time we come together as a community we’re strengthened. I’d prefer June, but the fact that we get it back in Piedmont Park, it really doesn’t matter to me when it is.

Ken: It’s an abomination. Gay Pride is the anniversary of Stonewall. Stonewall is in June, not October. It has nothing to do with Halloween. It has to do with significant events in the Gay calendar and significant events that happened in June. That’s part of our history. We don’t change history. I’m all about Piedmont Park. However, you need to honor what you need to honor, and location is not the reason we do this. I am ashamed of the Pride Committee for agreeing to this. I know people on the committee that are my friends, and I am ashamed.

Chris: Piedmont Park would only let us to do [this] weekend, and it turned out to be Halloween. Having it on Halloween will inspire people to dress up more, participate more, and it will be a lot more fun than everybody sweating in the heat in June. Having it at the different time of year does not take away from what happened at Stonewall. Around the country, Gay Pride has been celebrated at different times. It makes no difference in remembering those that were at Stonewall. We always have those thoughts with us, whatever month it would be.

And all of that leads us to this question: Where and when do you want to see Pride 2010?

Leave your answer in the comments section below and we’ll choose from among the most thoughtful and/or creative responses for a free pair of tickets to the Official Pride Kickoff Party on Friday.

Seriously. It’s a popular event — 1,000 tickets have already been sold. And we’ve got a pair for free.

Just respond by Wednesday at 5 p.m. and leave us an email address when you add your comment so we can reach the winner. (The addy won’t be published.)