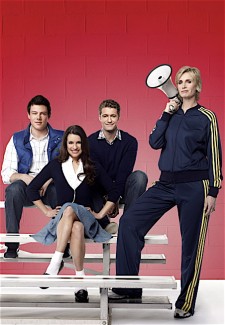 Last Wednesday, Atlanta press and die-hard “Gleeks” got a sneak peek at Tuesday’s episode at a special screening at Plaza Theatre to benefit the Grammy Foundation’s Music in the Schools program.

Here’s a spoiler-free preview of what to expect.

Glee club director Will Shuester (hunky Matthew Morrison) successfully had Sue put on suspension after she leaked New Directions’ set list to the other clubs competing at sectionals. Sue retired to her condo in Boca to plot revenge. Meanwhile, Mr. Shuester’s marriage unraveled when he discovered that his wife had faked her pregnancy, which sent him running into the arms of guidance counselor Emma Pillsbury (Jayma Mays), who ditched her husband-to-be, McKinley’s football coach.

As tonight’s episode begins, New Directions is still reveling in their win at sectionals, but things are changing. I hate to use the word “game changer,” but it sorta applies. Finn isn’t over Quinn, so he breaks up with Rachel. Despondent, she goes to the music store and meets Jesse St. James, the star of New Direction’s archrivals, Vocal Adrenaline, who they will face at the regional competition.

Rachel and Jesse (hottie Jonathan Groff from the Broadway cast of “Spring Awakenings’) fall in love over an intense duet of Lionel Richie’s “Hello,” but it’s too meet-cute not to have an ulterior motive.

Mr. Schuester, worried that Rachel’s attraction to Jesse will hurt the club, confronts Vocal Adrenaline’s director (Idina Menzel, from “Wicked” and “Rent”) about his concerns. Where they wind up is completely unexpected and puts Schuester’s budding relationship with Emma in question.

Yes, Sue Sylvester is back from suspension (how she gets reinstated is hilarious) and the venomous quips are fast and furious. The music – which plays off the title’s episode “Hell-O” – is varied and inspired, including Rachel’s kiss-off to Finn, All American Reject’s “Gives You Hell,” The Door’s “Hello, I Love You” and AC/DC’s “Highway to Hell.”

Other characters – especially Chris Colfer’s gay diva, Kurt – don’t get much screen time tonight, but everyone gets a chance to shine as the final eight episodes play out, including the upcoming “Madonna” episode where Sue recreates the Material Girl’s “Vogue” video.

Note: Stay tuned after the show, because FOX will show Sue’s “Vogue” video at the end of the program

If you don’t want to watch tonight’s episode alone, head over to Atlantic Station’s Central Park, where the episode will be shown on a giant outdoor screen. The fun – and prize giveaways – begin at 9 p.m. It’s sure to be “Gleek” heaven over there.