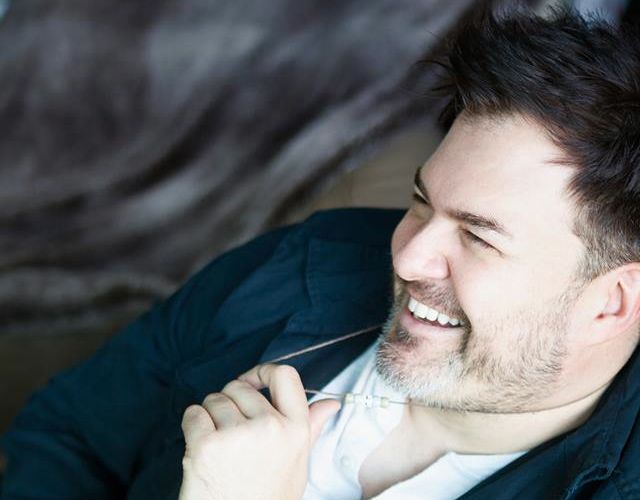 Gay Atlanta singer and songwriter Lucas Miré wants to inspire and exhilarate you with his new album, “Following the Landslide.” How? Just a guitar, his voice and a solo show on Saturday in Decatur.

Miré released the album, his third, last month. It's a project that also offers names including Edie Carey and Girlyman. Ahead of his release concert at Eddie's Attic, Project Q Atlanta talked with the songster about his new album, inspiration, dream collaborations and loss.

Hi Lucas! Thanks for taking the time to talk with us. How ya doin’?

I’m good, thanks. I’m super excited about everything coming up.

I know you’re a busy man, so we’re just going jump right into the first question. What initially inspired you to get into music?

I've always been a big music fan. I always spent my entire allowance on music, and was always at the record stores on Tuesday, when new music came out. I always liked music, but had never thought about doing until I read “The Artists Way” by Julia Cameron. In the book, she talks about something called a “Shadow artist.” She basically said, “If you spend your time, and focus, on this one thing, you might be good at it, but you're not stepping into your own art.” That resounded with me, so I got a guitar from a friend, and since I always wrote poetry, it just sort of flowed. This basically comes from a desire to express myself. I always thought I would only be in my own bedroom, singing to myself, never making a cd and performing for other people.

I’m all about inspiration and finding out what inspires people. What inspired the album?

Well, I'm always writing, so when I finished my second CD, I noticed that the songs I was writing all seemed to be about love after love (and no, not the Cher kind). There were a lot of songs about my mother. She died when I was in my 20s. I guess you can say the centralized theme is loss; loss of my mom or a friend. I had six friends pass away while I was making this album. It's all about carrying on. Also, I gained inspiration from my friends and their life experiences. “Let It Break” was inspired by a friend who was in a relationship that wouldn't die, in a way. I wrote it about that situation, but I don't think of it that way anymore, cause I've come to find my own place and feelings in that song.

Who would you pick as your dream collaboration? If you could name one person to cut a song with, who would it be and why?

I was overjoyed with the people that sang on this CD, so this was already kind of my wish list, honestly. Edie Carey is one of my favorites and the fact that I asked her, and she said yes, just blew me away. Girlyman, because their shows are amazing. You go from happy to sad to everywhere in between; it’s just a giant rollercoaster. Lucy Wainwright Roche was amazing to sing with. Rosanne Cash has always been my favorite, so she might come to mind as a dream collab.

For someone who’s never seen you, what should we expect to see at the show?

The music that I love is introspective and heavy, and I thought I had to do that. But now I've come to grow and realize that I need to mellow out and be honest with the songs. The songs do have a melancholy feeling to them but I think everyone will be able to relate to them somehow; no one is immune from losing someone close to them. If you come to the show, you'll be touched or something will move you to feel and you’ll correlate it to something in your life. It'll be just me, a guitar and my friend accompanying me.

Is going out alone, and not with a band, a scary venture?

It’s not actually. I’ve been playing like this forever. I thought I might want to be an actor or something at first, but then I realized I wasn't patient enough to wait around for people to help me with my art. So I liked the idea of a portable instrument. I like hearing some of my favorite songs stripped down, on just a guitar. I sometimes feel that songs get muddled in production and lose some of the amazing qualities that I love. But to go out on stage with just a guitar, and my voice, is vulnerable and exhilarating.

After the show, what's next?

Just gonna be doing more of the same. I’m gonna keep writing, keep on telling people about “Following the Landslide” and trying to get people to listen to it and enjoy it.

Enjoy Miré in concert on Saturday, May 25 during his CD Release Concert at Eddie's Attic. Download “Following the Landslide” and his other albums on his website.