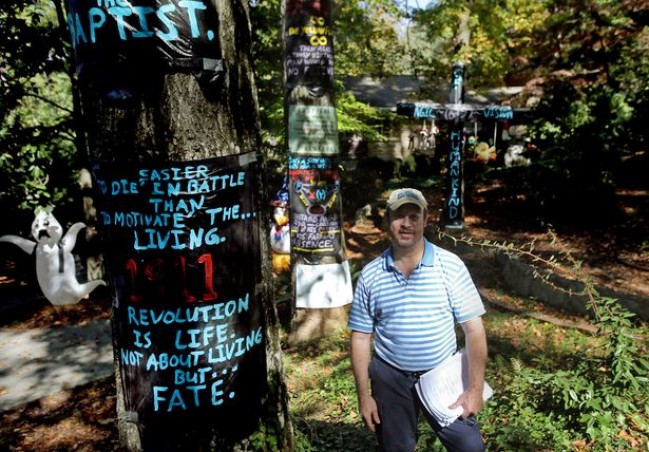 Many of Atlanta’s gay in-town neighbors are thought to drive up property values with home improvements. But one has his DeKalb neighborhood seeking relief from him. Not because James Avery is a “gay progressive.” Because they think he's batshit crazy. You’ve heard about them. You may have them, knock on wood. It’s those crazyass neighbors who leave Christmas decorations up all year, post ranting homemade signs all over their yards, rail against the world and go on vendetta campaigns against neighbors who don’t even live there any more. Meet James Edward Avery (photo), who’s on a one-man mission to soil the reputation of good gay neighbors everywhere. Residents on Mason Mill Road near Emory are at their wits' end over the homeowner who fancies himself the rabble-rousing Lorax of Dr. Seuss fame, according to the AJC.

The self-described “gay, progressive Razorback,” who lives on Mason Mill Road in the shadow of Emory University, has raised the ire of his neighbors with a display of accusatory signs targeting everyone from former Vice President Dick Cheney to “Hitlery” Clinton to the retired couple who once lived across the street. The handwritten polemics are surrounded by inflatable decorations — mostly blow-ups associated with Halloween and Christmas. There’s also a black cross with stuffed reindeer hanging from it.

DeKalb’s Code Compliance Division has “numerous complaints” on file. A fed-up neighbor sent an appeal directly to DeKalb CEO Burrell Ellis to say Avery’s particular brand of nutso is driving down property values and even that “people are afraid to walk past the property.” But the signs and yard rants remain. Actually, Avery has relented in the past and cleaned up code violations like nailing signs to trees and displaying signs bigger than six feet. But this time, he’s taking the attention he draws all the way to a judge. He says the county’s selective enforcement is unfairly targeting him,. He's due for his rightful day in court Nov. 27 to air his concerns and state his case. “I want to stand in front of a judge because I have freedom of speech,” Avery tells the AJC. Not much satisfaction in it for the neighbors either way, though. Even if Avery is found guilty and ordered to remove the junk, fines are the worst allowable punishment. If it goes like last time the county exerted its force on him, he could be back at it within a month. Of course, the Christmas decorations will be in season by then. Photos by Atlanta Journal-Constitution 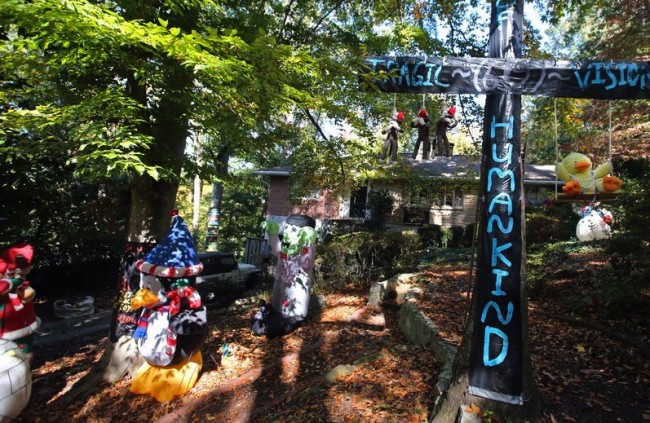