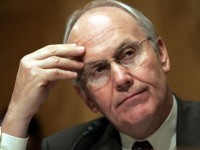 Sen. Larry Craig’s (photo) potty troubles continue as a three-judge panel of the Minnesota Court of Appeals on Tuesday rejected his bid to throw out his conviction.

Craig was arrested in June 2007 in a Minneapolis airport bathroom stall by an undercover officer who said the senator solicited sex.

He pleaded guilty to the misdemeanor and paid a fine, but changed his mind after word of his arrest became public. Craig insisted he was innocent, but the case effectively ended his political career.

Craig responded with a terse statement:

“I am extremely disappointed by the action of the Minnesota Court of Appeals. I disagree with their conclusion and remain steadfast in my belief that nothing criminal or improper occurred at the Minneapolis airport. I maintain my innocence, and currently my attorneys and I are reviewing the decision and looking into the possibility of appealing. I would like to thank all of those who have continued to support me and my family throughout this difficult time.”

It hasn’t been a good week for politicians nabbed in gay sex stings. In Florida, former state Rep. Bob Allen lost his appeal of a conviction of soliciting oral sex from an undercover cop in a park.

Allen was convicted last year of soliciting oral sex from an undercover police officer in a Titusville park on July 11, 2007. Police say Allen agreed to pay the undercover officer $20 for oral sex after a conversation in a Space View Park restroom, and suggested they go somewhere less public.

Allen said he hoped to seek refuge at a Kennedy Space Center security gate from the undercover Titusville police officer he thought was going to rob him, according to records.

Allen was sentenced in November 2007 to six months’ probation, a $250 fine and other court and restitution costs — a sentence delayed pending the outcome of the appeal.

Atlanta has its own unresolved potty sex sting case pending. Ed Wall, the former chair of the MARTA board, is scheduled to appear in court next February for charges stemming from his arrest in a bathroom at Hartsfield-Jackson Atlanta International Airport.

The charges stem from an arrest in March 2007 when Atlanta police say Wall was spotted in a stall having oral sex with another man. The fact that the case lingered for so long came to light earlier this month when the Atlanta Journal-Constitution reported that Wall was hired by Clayton County for financial advice. Wall, an investment banker, has advised Clayton and other governments in the past.