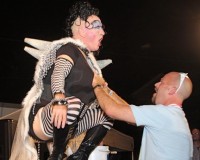 Nothing draws masses quite like a bawdy-as-hell drag show for charity. Accordingly, no event raises more money for Atlanta Pride than the East Point Possums Show, which opens Stonewall Week.

This year’s show is set for Saturday and features current performers, retired professionals and crowd favorites from the East Point Possums. The hootenanny hits the outdoor stage in East Point Commons once a year as the first of seven official Atlanta Pride Stonewall Week events. Find details on the rest of the week’s politicking and partying at the bottom of this post.

Need full visuals to confirm just how crazy-fun the Possums show gets? View our photos from 2010, when hundreds of people raised some $10,000 for the beneficiaries.

This year’s Possums show once again benefits the Pride festival, the Southeast’s largest, set for Oct. 8-9 this year. To add to the giving spirit, the Possums also give a cut to the Positive Impact’s MISTER Center this time around.

In short, the East Point Possums show has become a local legend, doing good in the neighborhood while providing the most fun you can have with your clothes on—well, most of them any way. Dress up to mess up and kick off Stonewall Week.

Why Stonewall Week now, Pride later?
If you’re new or have been living under a rock, you may ask yourself, “Why does Atlanta Pride have Stonewall Week in June and Pride in October?” The short version is that the annual Pride festival was moved to October in 2009 after a rough couple of years with the 2007 drought and an event lottery that moved the festival out of Piedmont Park in 2008.

Back in the park but still stuck under drought restrictions in 2009, they had to hold the festival on Halloween. Pride dug deep that year to come up with a week of June events that align with the anniversary of the 1969 Stonewall Riots. 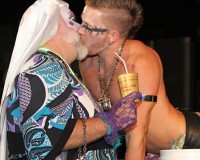 The date change remains a sticking point for some but after a successful October festival in 2010 with temperate weather and renewed vigor, we’re looking at early October for the foreseeable future. Moving the festival would be a matter of hard-to-overcome financing logistics, says JP Sheffield, executive director of Atlanta Pride.

“If we put on an event in any year in October, we can’t fundraise during the holidays, and that leaves us five good solid months to raised half a million dollars to do it by June,” Sheffield says. “The bulk of our sponsors that make cash contributions to pay for the event can’t write those checks twice in one fiscal year. So not only have you shortened the time to raise the money, you’ve eliminated the chunk of dollars that can help pay for the event.”

Stonewall Week 2011
That said and out of the way, back to this year’s Stonewall commemorations and celebrations. After Saturday’s Possums Show, here’s the rest of the Stonewall schedule. Click the event name for event more details:

Stonewall/Pride History 101 Variety Show
An evening of performances and music to commemorate Stonewall, remember the past, celebrate accomplishments and look forward to the future. Jungle donates bar sales through 11 p.m. and $5 cover to Atlanta Pride.
Jungle Club Atlanta, 8 p.m.

Sunday, June 26
Stonewall Brunch & A Movie
Screening of “March On!” presented by Out on Film with food and cocktails.?
Phillip Rush Center, noon