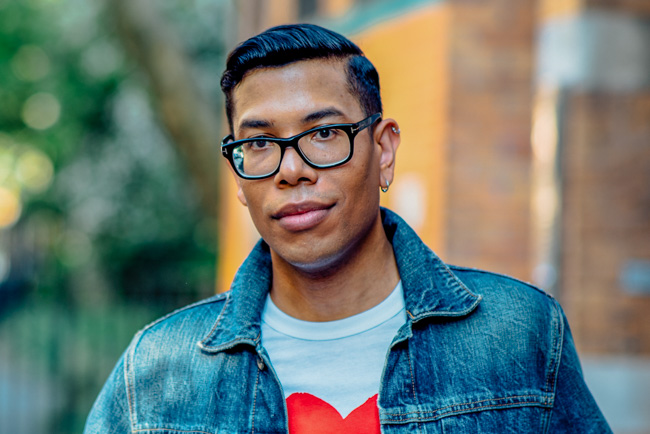 Like many people, “Pose” co-creator Steven Canals first learned about New York City’s ball culture of the 1980s by watching the groundbreaking documentary “Paris Is Burning.” But that wasn’t all he took away from the film.

“At the time, I wasn’t out, so the first time that I ever watched the documentary I was in my early 20s and was still coming into my queer identity,” Canals (top photo) told Project Q Atlanta. “I took strength from their strength, and one of the motivators to come out was watching this documentary and seeing how fearless they were in the face of disease, in the face of poverty, in the face of the hardships of living in New York in the ‘80s.”

“Paris Is Burning” gave him the kernel of the idea for “Pose” in 2004, but it wasn’t until 10 years later that Canals put pen to page while studying screenwriting as a UCLA grad student. It was during this time that he worked as a research assistant for Oscar-winning screenwriter Dustin Lance Black (“Milk”), helping write the pilot for the 2017 LGBTQ rights miniseries “When We Rise.”

Canals shopped a spec script for “Pose” to studios and networks for two years, and while they were enthusiastic, no one would commit to buying and making it.

“It was opening up doors but wasn’t keeping me in the room,” he said.

That was until he got a meeting with Ryan Murphy, the out TV titan who was fresh off bagging a boatload of Emmys for “American Crime Story: The People vs. O.J. Simpson.” Murphy was already developing a show set in the ballroom scene based on “Paris Is Burning,” and after hearing Canals’ pitch, he said they should partner up and make it together.

The show stood out not only for the subject matter, but because the “Pose” creative team assembled the largest cast of transgender actors ever for a television series.

“There was a lot of pressure that we put on ourselves to make sure that we got it right, that we were being subversive in our storytelling, that we weren’t falling into the trap of tropes, and that we were highlighting and celebrating this community in the way it deserves to be,” Canals said. “We’ve just never seen these lives captured that way.”

Of the tropes to avoid, Canal said, “If you’re trans, you are the body that’s found and you’re the catalyst for some narrative for some cisgender cop to go figure out the case.”

“I’m not the only Afro Latin writer in Hollywood who has a story like this to tell, and if we don’t get it right, all those other people who are standing beside me who also have stories to tell, they might never get a chance to,” he said. “We needed this to work and it needed to be successful, and I’m grateful that it is.”

Canals was sitting at his kitchen table having lunch one day in July when he got news that attests to that success.

“Ryan Murphy called, and he was like, ‘Girl we got picked up for a second season,’” he said laughing.

“There’s so much more story to tell. We’ve all just fallen so deeply in love with these characters and with the actors who portray these characters that it would have been heartbreaking to not get to jump in the sandbox with them again,” he added.

The second-season pickup was also good news for LGBTQ rights and LGBTQ aspiring actors. Murphy has donated all of the money he’s earned from “Pose” to LGBTQ organizations. And the ballroom scenes each feature over 200 paid background actors who are getting the hours they need to get into the Screen Actors Guild.

“The show is providing a lot of opportunities and economic resources to individuals who haven’t had that in the past,” Canals said. “So, to come back for a second season means we’ll be able to continue that, which is wonderful.”

Canals spent the summer refueling, taking long naps and doing research about New York in 1989. That’s right, season 2 of “Pose” makes a time jump. The writer’s room reconvened in September and the second season will premiere sometime in 2019.

“Pose” star Dominique Jackson will appear at the Georgia Department of Health's MSM Symposium on Thursday night at 7 p.m. at The Loudermilk Center.