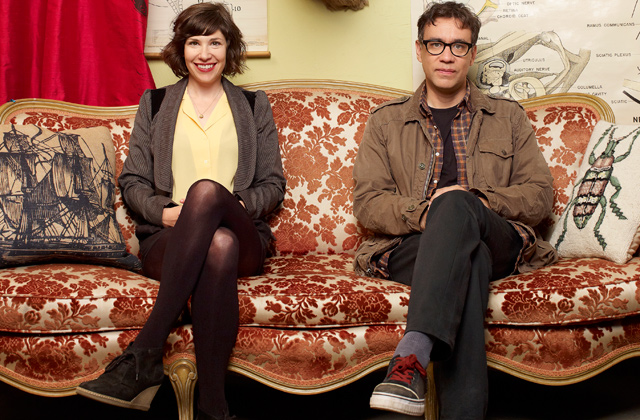 The pair brings some of their most popular characters to the stage at Variety Playhouse just as the second season lands back on IFC. The show’s success, fed by viral videos of some of the pair’s best work, made quick fans of the college crowd and the gays. So it wasn’t long until even of the same politically correct neurotics the show sends up – the same ones who spawned such Twitter hashtags as #firstworldproblems and #shitwhitepeoplesay – are obsessed.

Lesbian riot girl rockers need no introduction to Brownstein (photo, left), who Armisen (right) calls his platonic “best friend and soul mate.” And Creative Loafing gets to know Armisen a little better in advance of the tour, which includes special guests such as “It Gets Better” founder Dan Savage and “SNL” great Dana Carvey.

For Atlanta, Armisen wants to tell the sold-out crowd who the guest is so badly, but can’t:

“There’s someone I’m trying to get, but I don’t even know if it’s a yes, so I can’t spoil the surprise,” he says. “But it’s someone who was in a really popular pop group, a trio. And I really used to love them. They’re not really a band anymore; they’re just singers. Oh, god! I love them so much. I can’t say anymore because I haven’t heard anything back.”

Lucky ticket holders just have to wait and see then brag about it for those who missed it. In the meantime, here are three of our favorite sketches that went viral and got gay Atlanta tuning into IFC on Fridays at 10 p.m.