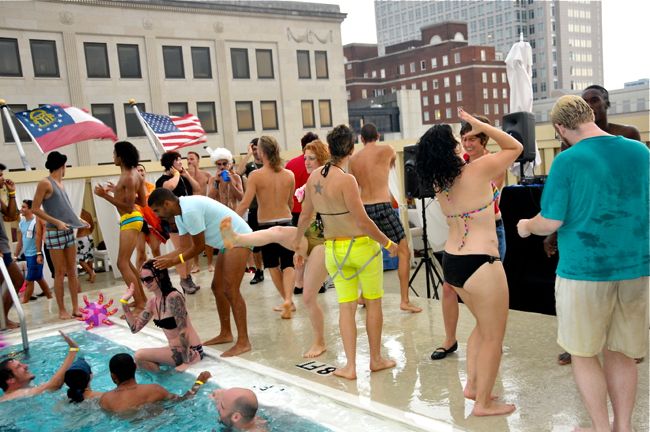 DJ Vicki Powell knows how to attract attention – and a crowd. True to form, the local legend, guest DJs and a co-ed crowd of LGBT partiers lit up her annual Fourth of July Rooftop Pool Party. While plain ol’ Atlantans were cooking dogs and waiting out Monday afternoon before hoofing it to see fireworks later, the big gay Powell & Co. were already in place atop the Melia Hotel splashing, cavorting dancing and generally creating Independence Day mayhem. DJs Mike Bradley, Kyle Keyser, William Roman, Stefan Kallweit and Rami Freiji helped Powell crank out tunes for the bathing beauties and swimsuit studs. The party also included drink specials and barbecue along with the hotel’s full menu and attentive bar staff.

Skimpy swimwear was requested, and the guests did not disappoint. Crazy semi-drag, mermaid tails, spontaneous make-out sessions and games of chicken in the pool weren’t specified on the invitation, but the crowd brought those tidbits to the rooftop as well. By the time sunset came and the local fireworks shows commenced, the gays enjoyed their prime viewing spot before turning their attention back to the celebration, which continued well after the fireworks traffic down below had cleared. Photos by Omar Vega