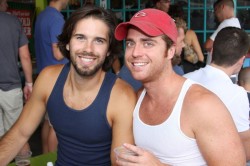 It’s been a beer bash sort of summer for gay sports groups, and the water polo team of the Atlanta Rainbow Trout didn’t want to miss their chance to get in on it.

So the pool jocks hit Frogs Cantina on July 18 for a beer bash fundraiser before many of them shipped off to Cologne for the Gay Games. That’s where they will be among 9,500 athletes taking part in 34 different sports. The Gay Games open on Saturday. 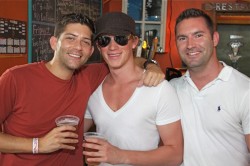 But no worries — the Trout’s aggressive practice schedule continues even while the water polo team is away at play. Trout members who swim hit the pool four days a week, divers on Sundays and water polo three times a week.

What do we mean when we say it’s been a beer bash sort of summer? Oh, that’s an easy one. The Hotlanta Soccer Association held one to watch the World Cup finale July 11 and the Wet Demons of the Hotlanta Softball League, also held one the same afternoon. That double-play was a repeat of their afternoon of beer both teams hosted on June 12, too.

On June 5, the Pink Cadets of Hotlanta Softball had one, and the Wet Demons hosted another on March 13.

Hotlanta Softball’s Titans got into the action, too, with an event that offered bowling, beer and boys.